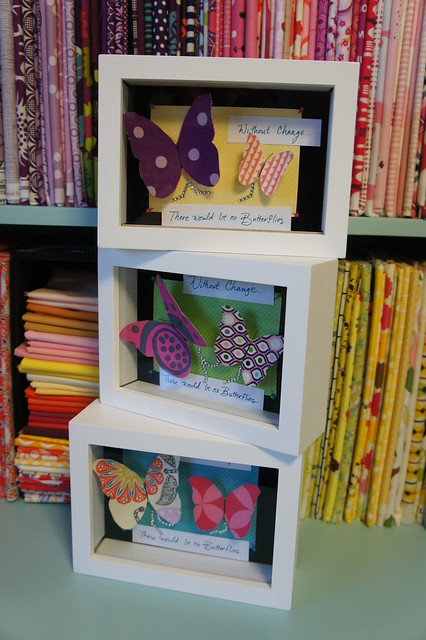 I knew when I saw these adorable Shadow Boxes that Kim made for Sara Lawson for her booth at Quilt Market that I had my teacher gift for the year! They are sweet, simple and perfect for a Montessori teacher of little ones! So I bugged Kim to get her tutorial ready for this right after market (no rest for the weary! Sorry Kim!) and I made my own version together with my four year old daughter for each of her three teachers. To make your own, you can find Kim’s tutorial HERE.  But I’m also going to show you our work…mainly because I’m proud of myself for tackling another project with a four year old that I have expectations for. 😉

The biggest expense of the project is the shadow boxes themselves.  So search around your local craft stores or online for the best deal of the week on them.  I found mine at Hobby Lobby for 50% off, so I managed to get them for $9 a piece.  The rest of the supplies I had on hand but you do need modge podge so pick that up if you don’t have any at home. 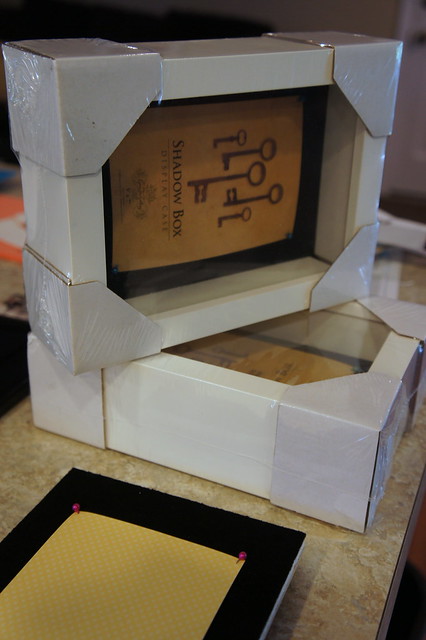 I used Kim’s templates and cut out two different sized butterflies per box.  I was just sort of winging it (haha!) and didn’t measure how well the sizes would fit together in the box.  But for my box I think I preferred a large and a small butterfly the best (I did two with a large a medium and it was a bit more crowded) for the size of my shadow box. 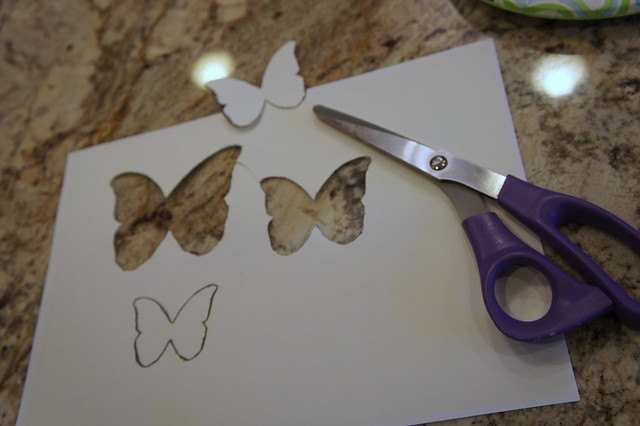 Then I let my little girl go to work with the scraps that she had picked out herself from my scrap boxes full of fabric.  I had a feeling she would go for the pinks and purples. 😉  The next step involves paint modge podge onto the butterflies, placing a piece of fabric over the top and then smoothing it out.  Definitely a task that she could handle.  Just a note, I had her doing this on a paper plate and that turned out to be not the greatest idea…I should have used something plastic.  We were beginning to glue the cardstock and fabric to the plate…it took a little mama rescuing to get those off the plates in good condition.

Soon we had a collection of drying fabric butterflies back with cardstock.  When they were dry, I re-cut them back to the butterfly shape and sewed along the center as Kim’s tutorial says to do.  This sewing step is vital because it gives the butterflies a better bending ability and makes it easier to make them look like they are flying. 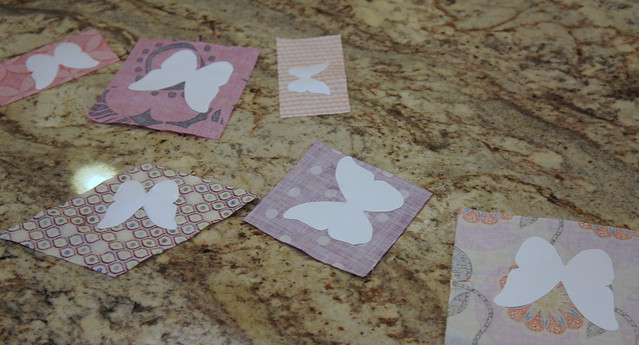 I cut up some colored scrap book paper that we had picked out as a back ground for the boxes ( I had to explain to her that pink butterflies would not stand out against pink backing. lol  Otherwise this would have been ALL pink!) And pinned this paper in place with little pins 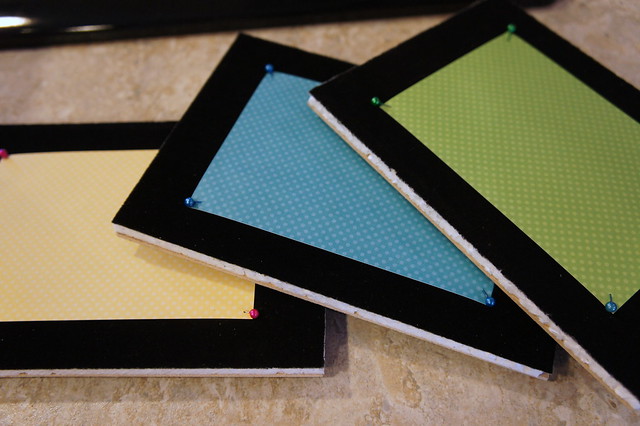 Then with the help of a little foam stickers, I let Caitlyn arrange which butterflies would go with which background and put them on at jaunty little angles.  She did great! 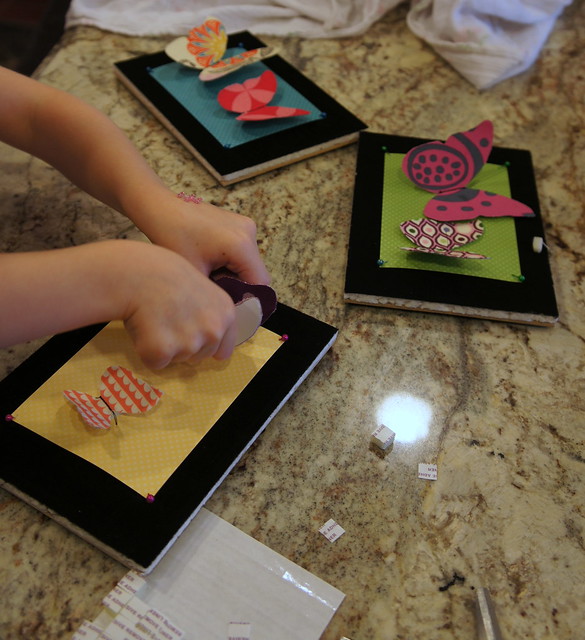 Then I took over the project for a bit to create the words for the boxes.  I found a great little saying that just spoke to me.  Without Change their would be no Butterflies.  I think it really touched all of the teachers too because at the end of the year, they are saying goodbye to so many beautiful children that they have helped to form and mold.  And now they are flying off to new places. 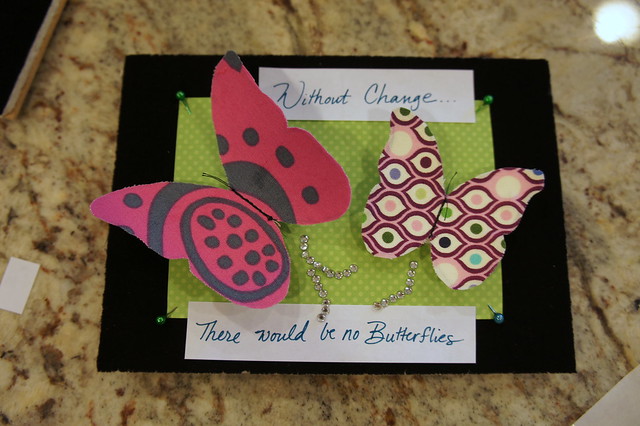 And then we cut up some sparkly letters we found on clearance and added them as little wind swooshes from under the butterflies.  It wouldn’t be a gift from Caitlyn if it didn’t have sparkles! lol
Each box turned out Unique and Beautiful and Caitlyn was proud to hand them out to her teachers at the end of year picnic.  They were all a bit teary eyed by them even though Caitlyn is coming back the next year.  I think it was the general sentiment for the children that are moving on and are older. 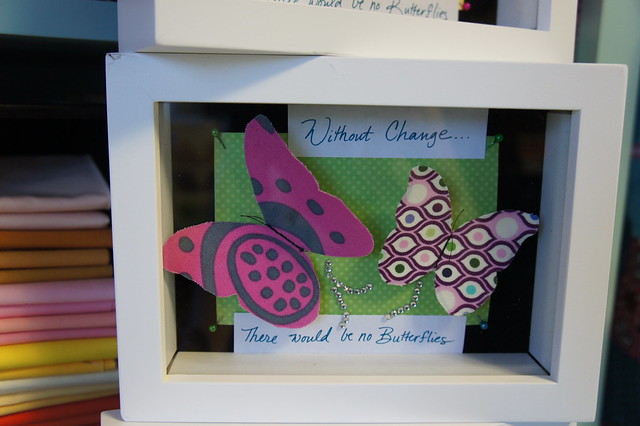 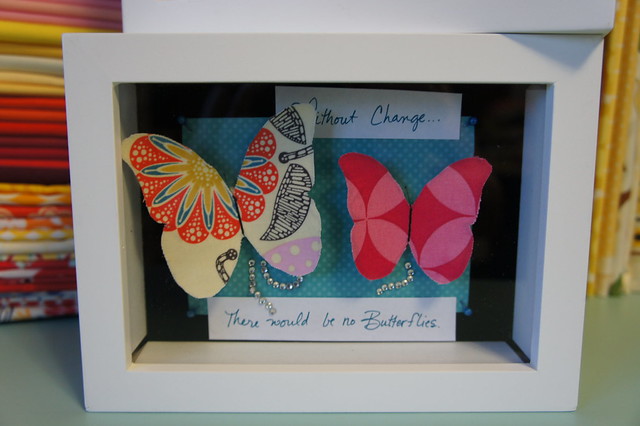 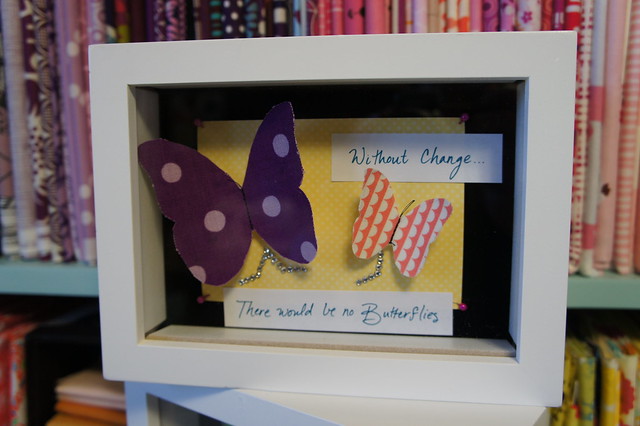 Hopefully this inspires some of you to use Kim’s darling tutorial or to come up with your own teacher gifts.  I was glad to have something that Caitlyn could actually help make and that I didn’t totally lose my mind making with her.
What have you all been doing for teacher’s gifts? Never fear…I hear that Starbuck’s giftcards are always welcome too.