Well I’ve been on the computer all morning anyway, so I figured I should update my newest creations. I’ve been a little behind because my laptop is pretty much dead and I’m having to use my husband’s computer…but that’s a whole other story and the good news is that a new laptop is on its way! Yeah! Hopefully it will be light years faster than my old one. It really was old.

Anyway… having a dead computer has made me get up and sew more I think…either that or I’m just nesting through sewing! A little of both probably. 🙂 The item that I was most determined to finish was the bumper for the baby crib. I used all the ladies from the Bee Modern Block exchange to help me make the blocks for it, but I was still pretty intimidated to start on it. I’ve never made a bumper before and although I had collected many different patterns and instructions for making one I was still worried about it. I was prepared for everything to go wrong…and you know what? I don’t think anything did! That’s pretty incredible for a new sewing project with so many ways for something to go wrong!

I was pretty meticulous in my sewing and planning and I’m sure that helped in the long run, but I am still amazed at how it turned out. I don’t think that I’m going to want our little girl to ever get it messy! And that’s not very practical now is it. I was worried about everything from running out of fabric, to color choices (something I am RARELY worried about), to sizing issues. But I persevered and came though with a decent product. I essentially made a really long pillow case that I sewed shut in pieces as I inserted the foam. Here’s the final product…I thought about taking pictures as I made it, but I was too nervous sewing it all together to want to capture it on film! 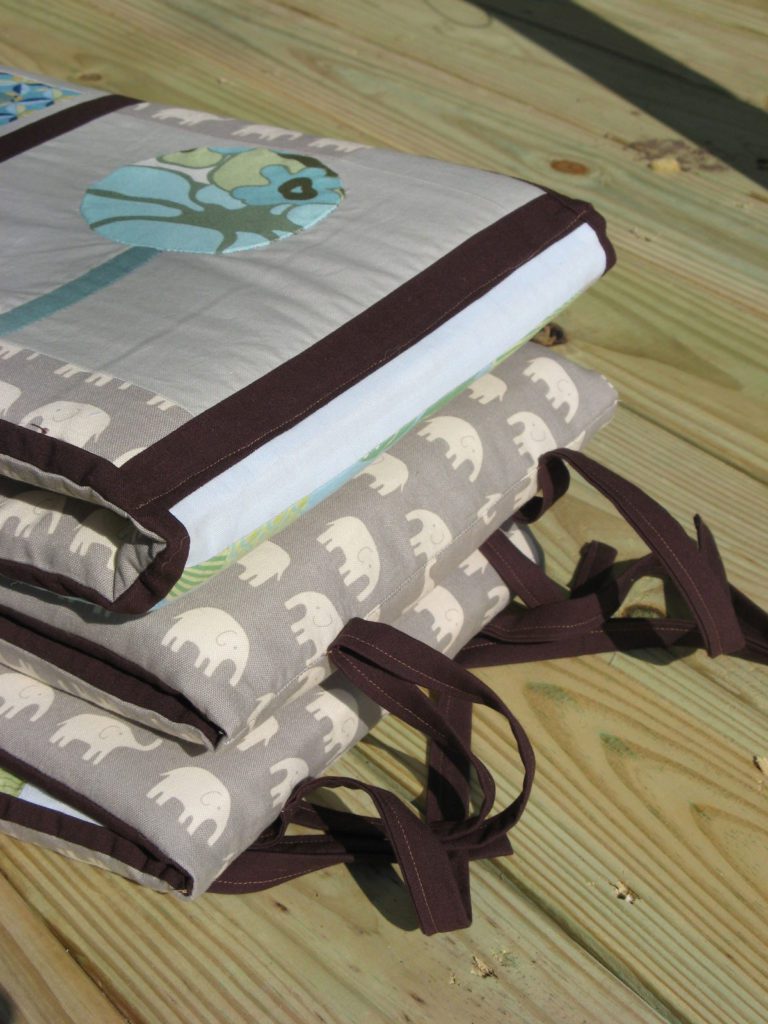 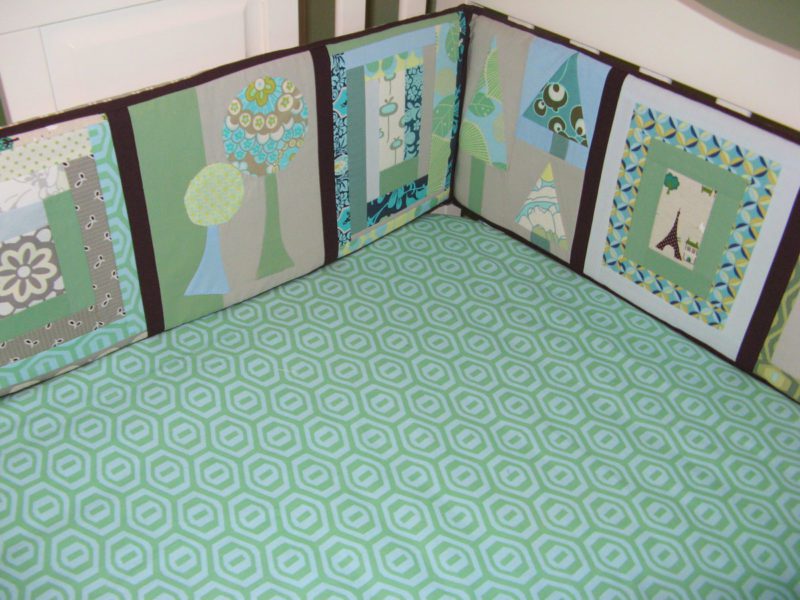 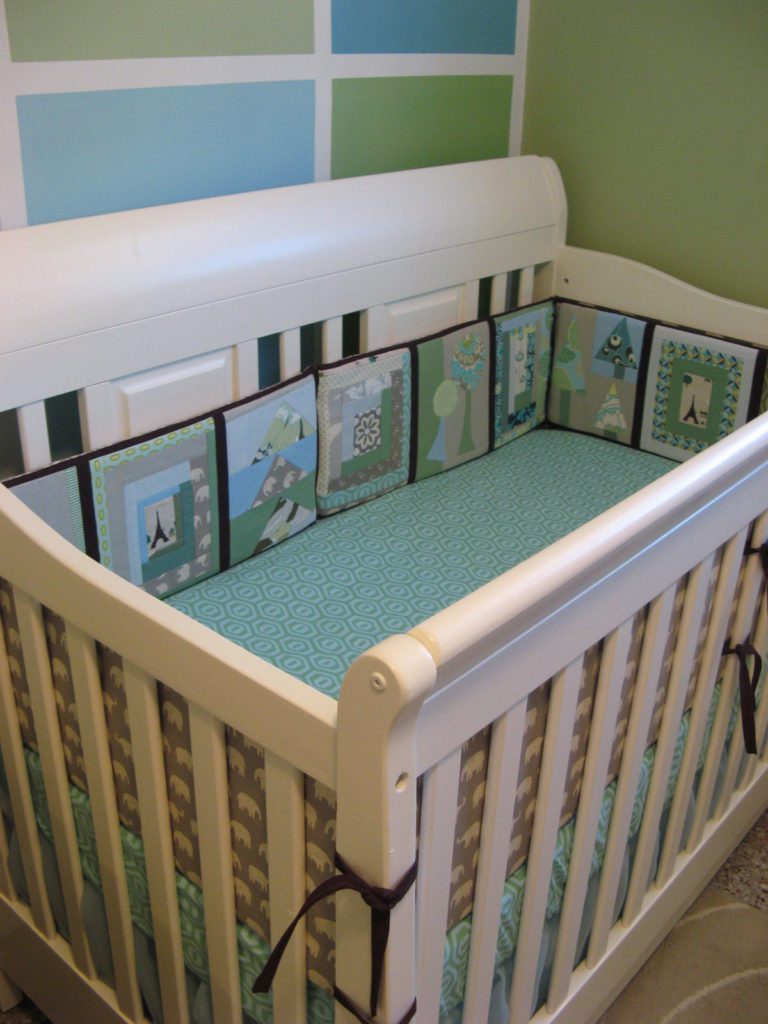 You can see lots more pictures of the bumper here!

And you can finally see the crib sheet that I made (one of them) and a peak at the crib skirt I made. It all looks so pretty together…I am happy with them! 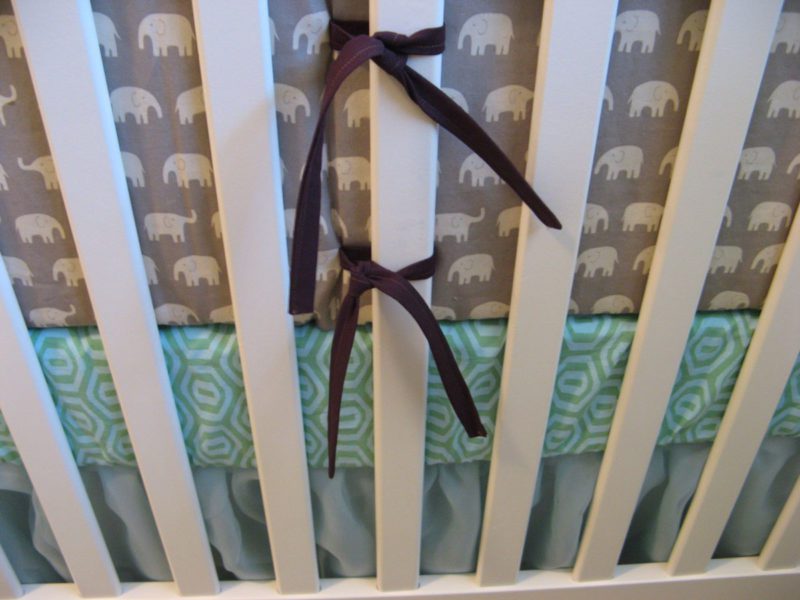 The bumper was a ton of work, but it’s not the only thing that I’ve been doing. No siree! I made another blanket and burp cloth set for the little girl and this time I decided to add some pink because so many people have been giving me a hard time about how little pink I have in the nursery. My justification is that almost all of the clothes seem to be pink, so there will be pink in there eventually…but I digress. The blanket was more complicated than most that I make because I decided applique across the whole bottom of the blanket. Usually I just put one larger piece in a corner. But I’m an over achiever and I wanted more for this blanket. Each of the circles was hand gathered in the back to achieve perfect roundness. I machine appliqued all the pieces to the blanket to create a little modern garden. And yes, there is pink! But also purple, green and yellow. I can’t get too traditional on you! 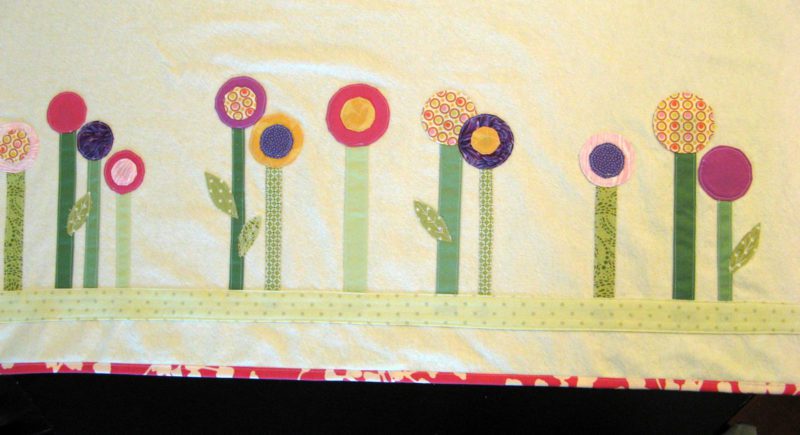 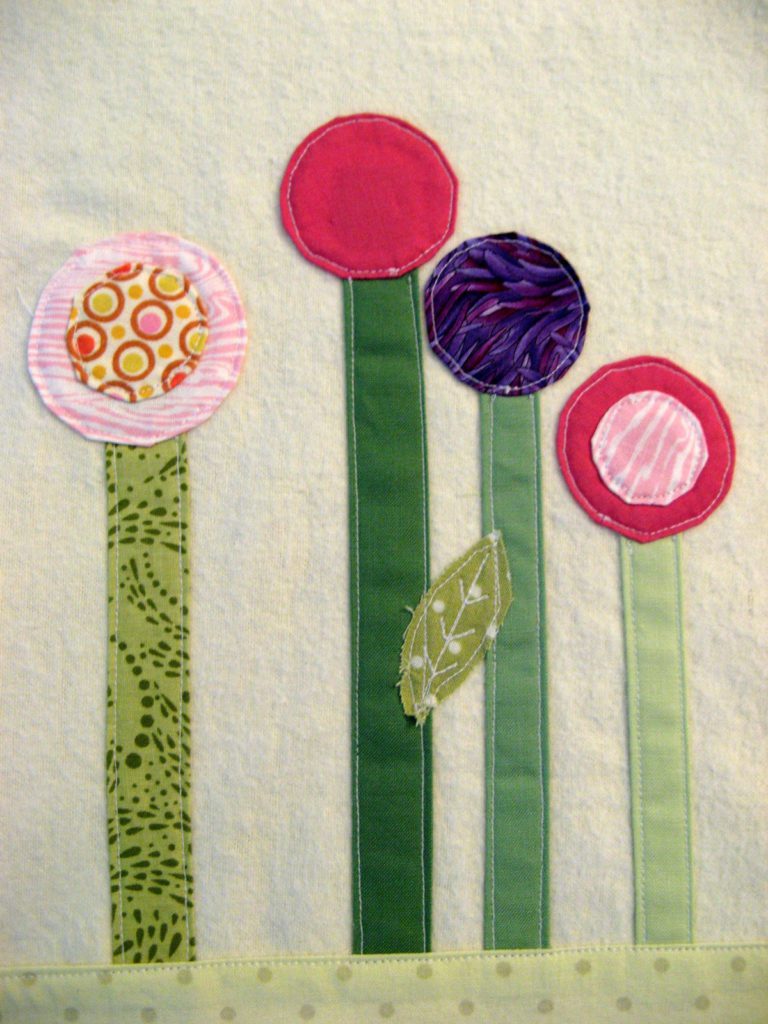 And then to top it all off I also made some matching burp cloths! 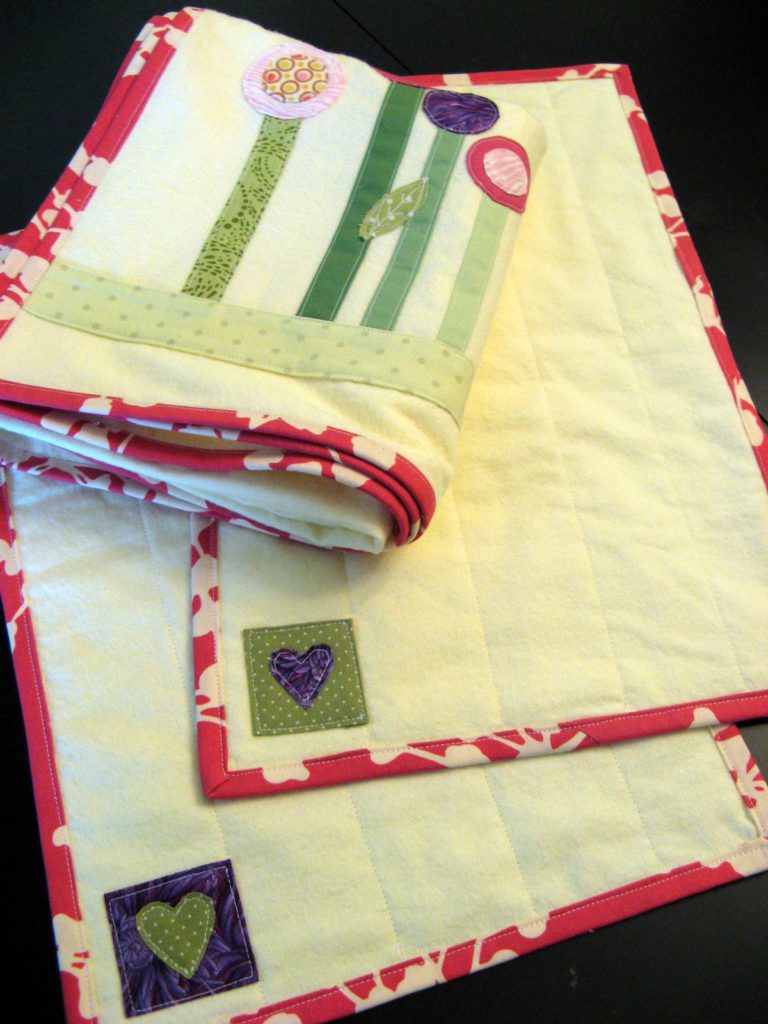 But wait…there’s more! I told you that I’ve been busy! I also finished the December Bee Modern blocks. But wait you say, it’s only November. Yes, but the bambina is due in December and I didn’t want to not finish the blocks because of her arrival. And now I’m set until the end of January with this group and needing to sew. Woohoo! I love being on schedule (or in this case ahead of it!).

She sent us a very bright collection of Kaffe Fasset fabrics and solids. I’ve never actually owned any of his fabrics, so this was another new experience for me. It was great to work with some of them in person and see what I think. I loved her theme for this month as well. She is making an “X and O” quilt and wanted us to make a block of each. Too cute!

I knew immediately what my “X” block should be from her inspiration images. A string block that I’ve really been wanting to try. I followed this tutorial and I loved the method. I will definitely be using this in the future for a quilt.

My “O” block actually caused me a bit of anxiety and I originally started with a completely different block. I only finished a quarter of it though because I realized that I would not have enough of her fabrics to make the full block. I definitely plan on making that block design for another month though, so I’ve got it on the back burner. I eventually decided to make a quarter pieced circle block. Now I’ve done that a couple of times already for this group, so I was initially wanting to do something different. But I decided to do a very complicated version of the block and let me tell you, that was different enough! I did enjoy laying out the fabrics but it was a lot of piecing again. Hmmm…still not as much work as last month though, so I guess I shouldn’t complain! 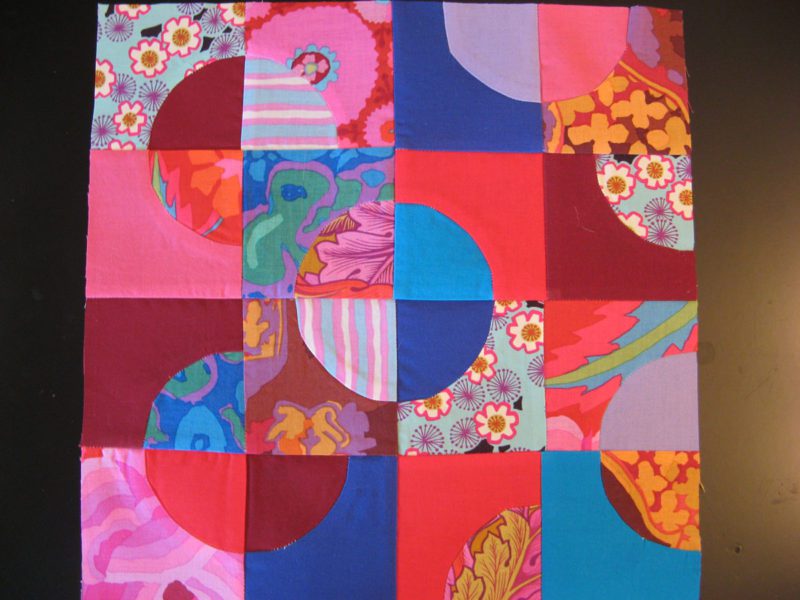 And some detail shots… 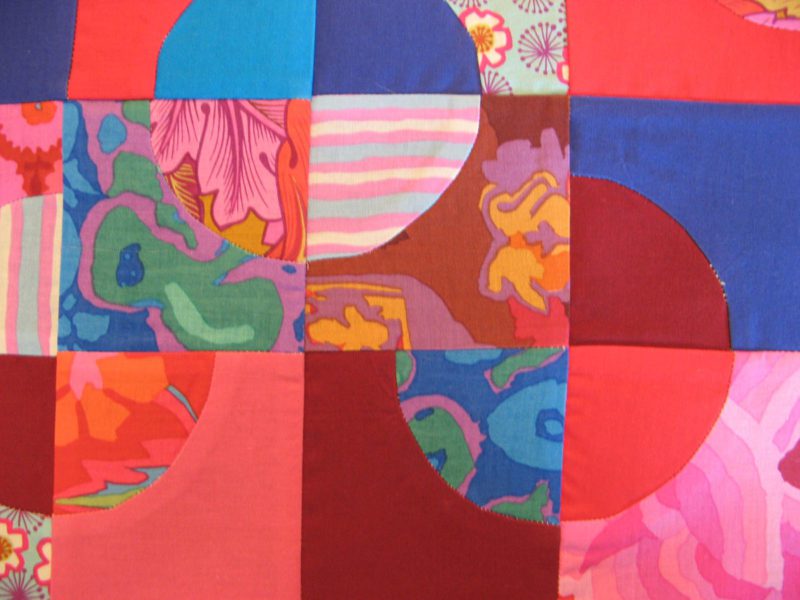 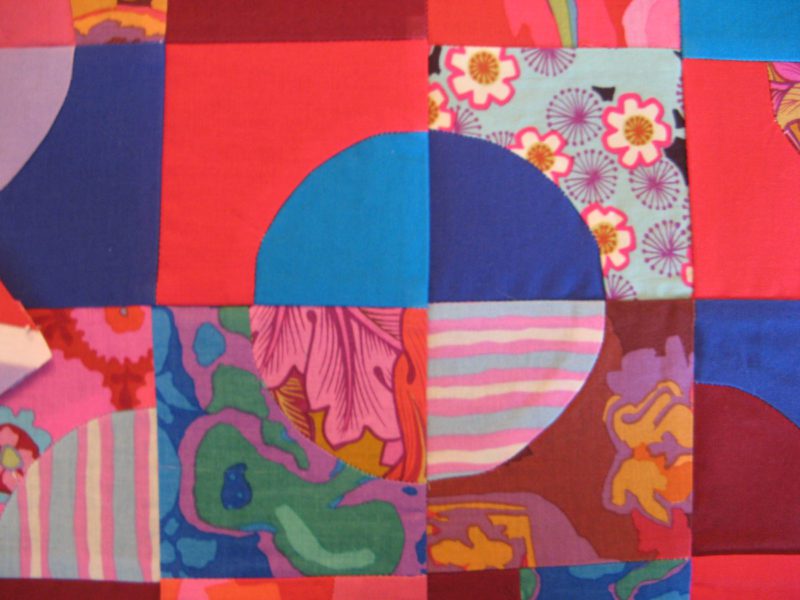 The two blocks together! 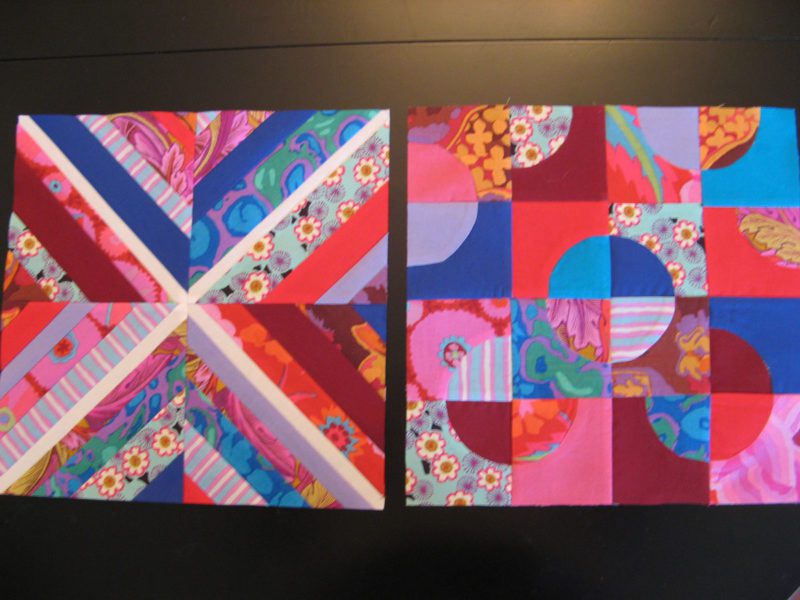 And I’m still working hard on more! This time I have a few baby quilts that need to get knocked out. I have the top pieced for a little boy quilt that a friend requested and I’m planning on basting it today and quilting it together this week! I’m still waiting on some of my blocks from the Bee Modern Group, but when those get here I’m going to do the baby quilt for my girl. And then there is another little girl quilt that another friend requested and she wants to use Amy Butler’s new line Love! I’m going to keep myself busy in the next few weeks before the bambina gets here. Hopefully I’ll be able to finish at least two of these quilts! My goal is all three, but I’ve been known to over estimate. 😉

5 thoughts on “My newest creations!”