Okay, onto my second entry in the Sliced competition by Moda. For this entry I wanted to do something that had some more piecing to it. I’m totally not sure what the judges are looking for (which I think I told everyone of you who commented on the first entry! lol) and I wanted to show that I could sew more than squares together. In case they don’t know that. 😉

There was a lot of hemming and hawing along the way, but ultimately this inspiration/memo board is what I ended up with. 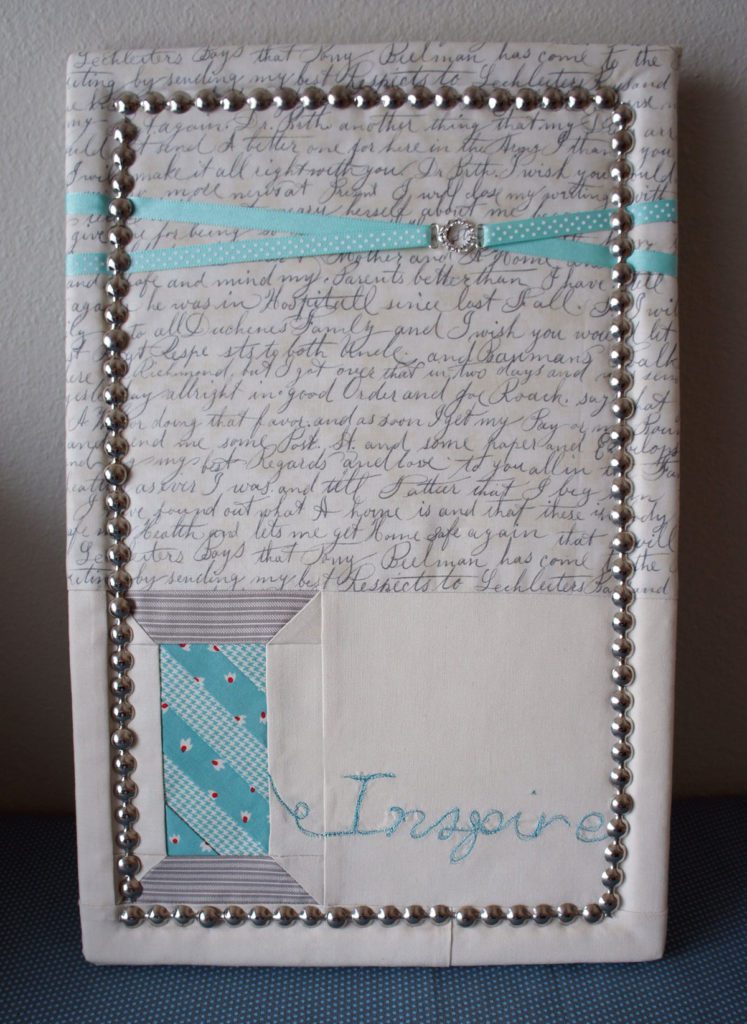 Isn’t she pretty?! All sparkly, restrained, texty, and paper pieced?! As my friend Kelly said, this looks so much like ME. I may or may not be a girlie girl. 😉

Remember, we had to use batting, moda precuts, a buckle, and make something for an office/studio. Once again, I’m completely practical about what I need in my office space…and that is a place to tack up all of those inspirational pictures! But in a pretty, sparkly way! 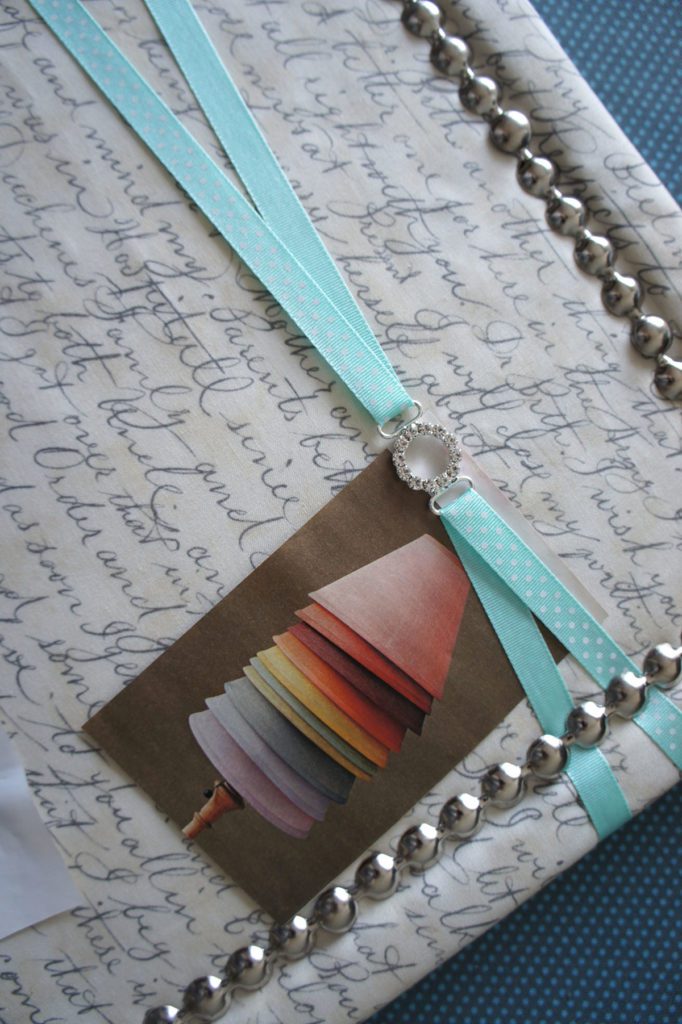 I designed a bunch of spools to be paper pieced but in the end I decided that I only needed one. There was enough going on already on this board. I’m totally in love with this spool and fully intend to design something much larger (*cough* quilt *cough*) using all my spools. It’s a great little paper pieced block and you could some really cute fussy cutting on it! 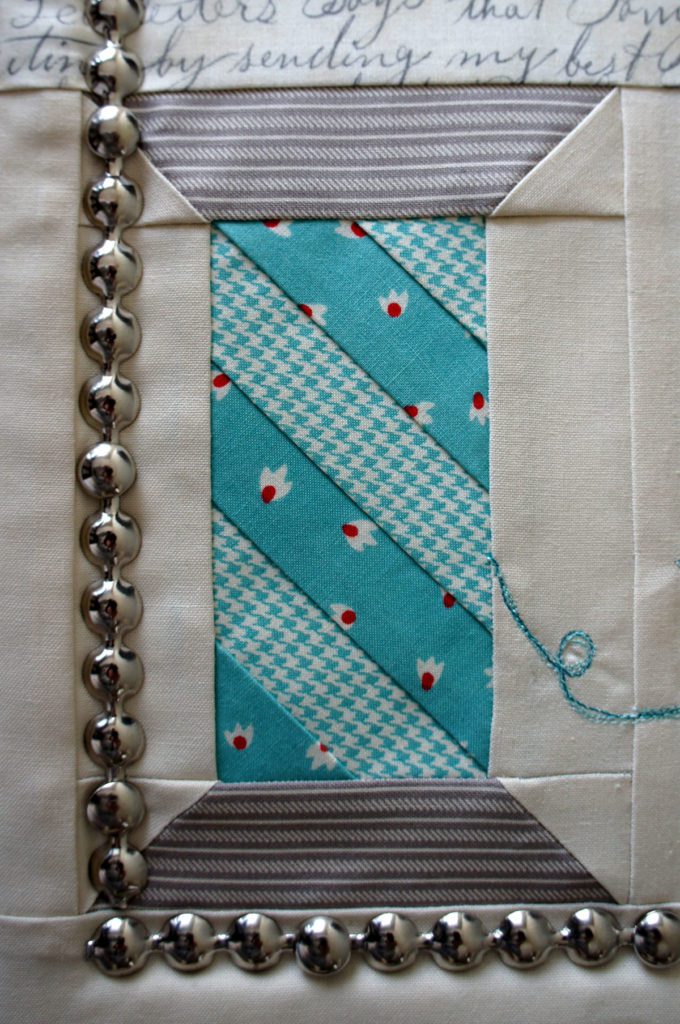 I wanted to show that I could do other things too, so I decided to do some free motion thread writing on this as well. I’m going to admit that certain letters I love and others I don’t. I’ve definitely learned to go with my gut because the ones that I was concerned about are the ones I’m not as in love with. But I won’t color your view any more than that. I used two shades of aqua thread and went over this fours times. 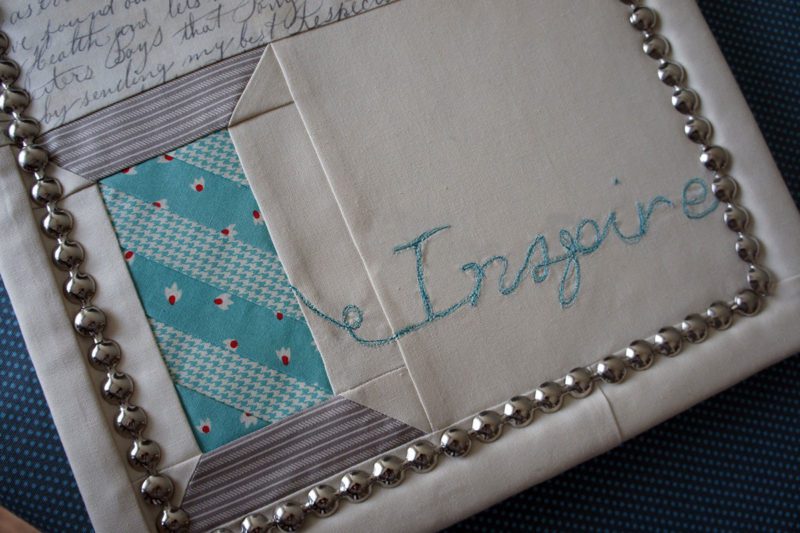 I love the word “Inspire”. Because that is really why I collect the little bits and pieces that I do that end up on a board like this. I could have a whole wall like this. lol But that would be too cluttered for me ultimately. So it’s good that I kept it small.

I used upholstery tacks around the perimeter to give a nice border. I decided not to do a french memo board with all the ribbons criss crossed across it because I had piecing that I wanted to show and I thought that would be too distracting. Although I had a fabulous twill tape I was going to use. If I hadn’t had to get a buckle in there somehow this probably would have turned out differently. But that’s the game, and that’s how I played it.

I also did a photoshopped version without the text to see if I liked it better that way. I still can’t decide! 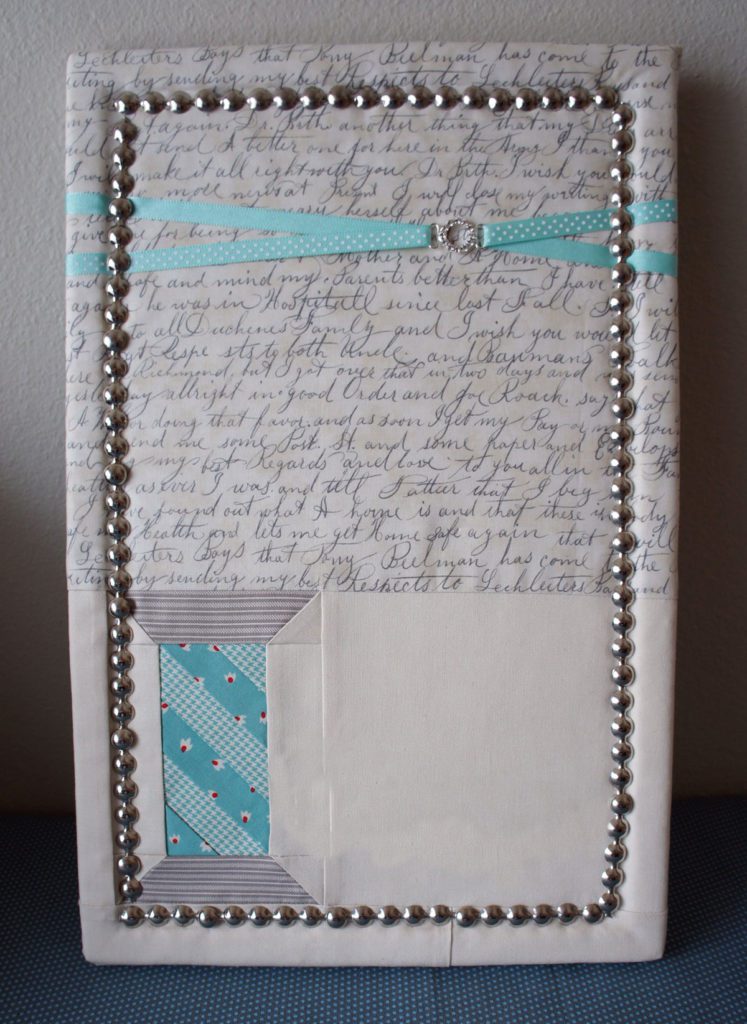 So that’s my second entry. I made myself stop with the third. I worked one full evening on it but decided if I wasn’t going to get in with one of these two that a third one wasn’t going to make the difference. I’ll still finish it up and show it to you all at some point because I chopped up a precious charm pack for it. But I needed to give myself a break. Yay for self restraint!

They announce the contestants sometime tomorrow. Once again…who knows what they are looking. But I’m proud of my two pieces and I’ll be happy to use them myself. So I really can’t ask for more than that. (Well I can, but I’m trying not to.)