Well another month has come and practically gone.  And before it ended, we had a little matter over here of getting a six year old to buckle down and sew a block for another little girl that she’s never met in person. LOL.

Yes.  It’s another edition of “Not Your Mama’s Bee”.
Take your anxiety meds.  Grab a stiff drink.  Eat some chocolate.  Because you are about to sew with a strong willed child whose attention span seems to be split second at moments. 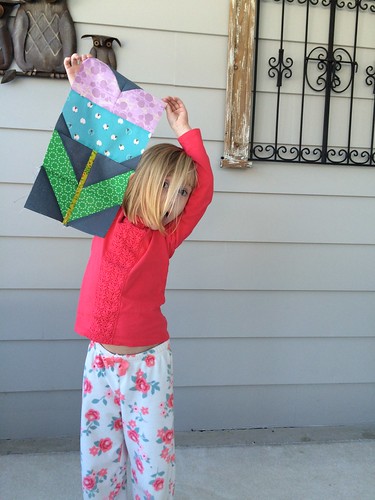 This month’s block was for Lee’s (of Freshly Pieced) daughter Elsa.  It’s a darling block from a pattern by Holly DeGroot called The Amsterdam Quilt.  Caitlyn selected fabrics from my plentiful wall of fabric based on the color preferences of Elsa with a refreshing lack of concern for how the prints might look together.  I actually learn a lot by the freeing way that she chooses what she wants to use. 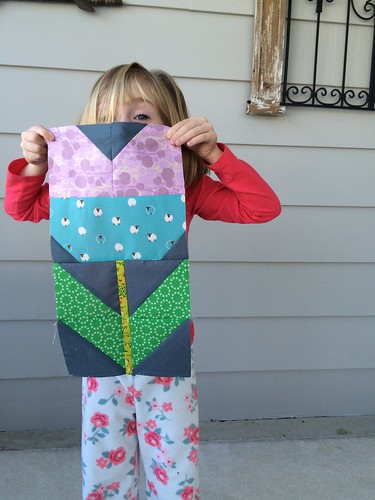 Given her age and abilities, this block was fairly mama heavy in terms of cutting and reading the directions.  I was working with her on sewing on a straight line, and we definitely made some progress on that! And reminding her to sew with the Right Sides Together…or as well call them, The Pretty Sides together.
I will admit that in my effort to have her follow the pattern herself, I followed only the pictured instructions.  Well that meant that I missed a crucial step where we were supposed to trim down the HSTs of the leaves.  So we finished putting it together and I just chalked up the weird seams to the fact that I was having a six year old sew them.
But nope.  It was mama’s fault for not reading the directions.  So after we were all done and she went on her merry way, I undid most of the block so that I could trim down those triangles.  Then the block fit together beautifully.  :p
I feel a bit guilty that the end block is only half sewn by Caitlyn, but it was originally all sewn by her.  And trust me.  There was NO WAY that she was going to sit down and sew this again.  lol 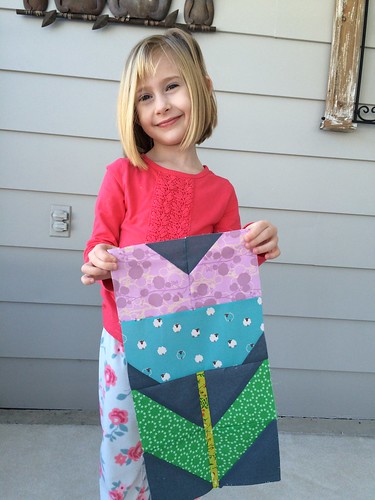 But now, having sewn half of the block and cutting it all…I would TOTALLY make this quilt myself.  It’s darling!  And a great option for a bee quilt like we are doing.  Just be sure to trim down those HSTs for the leaves and you’ll have no problems! 😉

10 thoughts on “Not Your Mama’s Bee – January Edition”