Well the deadline is coming up and I’m trying to kick into high gear to get my doll quilt done. But along the way I also need to finish a small quilt for the charming mini swap and get some more bee blocks done! Then I need to start another mini quilt…but that one is supposed to be really mini, 12″ or so…so I think that will help.

I completed the bee blocks for the Bee Liberated Bee. Once again, I really like this bee because every block so far has been really laid back. Stay tuned for my month (which is not for months) though because I have a few ideas up my sleeve! This time we were working with some shirting scraps and shades of blue and neutrals. She asked for the classic Gwen Marston style “log cabin” block. Which is your basic wonky block sewn together in cool ways. She wanted them 8″ high but they could be any length…so that was nice too. 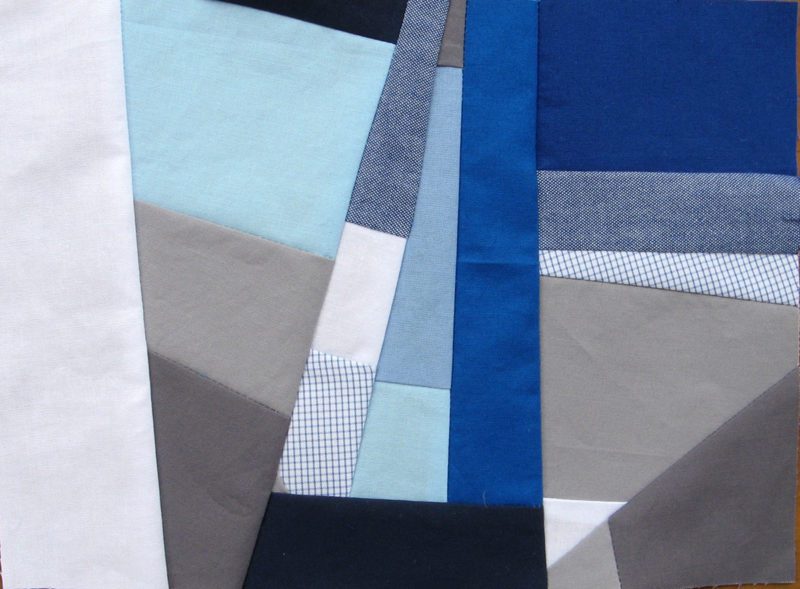 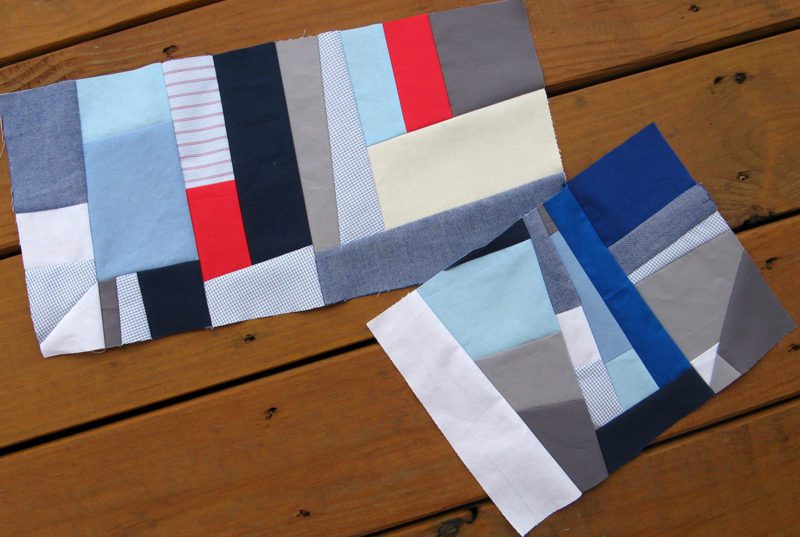 For the charming mini swap – that I will somehow do along with the doll quilt – I am doing a joseph’s coat quilt. I love this pattern and I want to do something hand sewn that I can work on late at night in front of the tv when I’m up by myself. First I created this pattern: 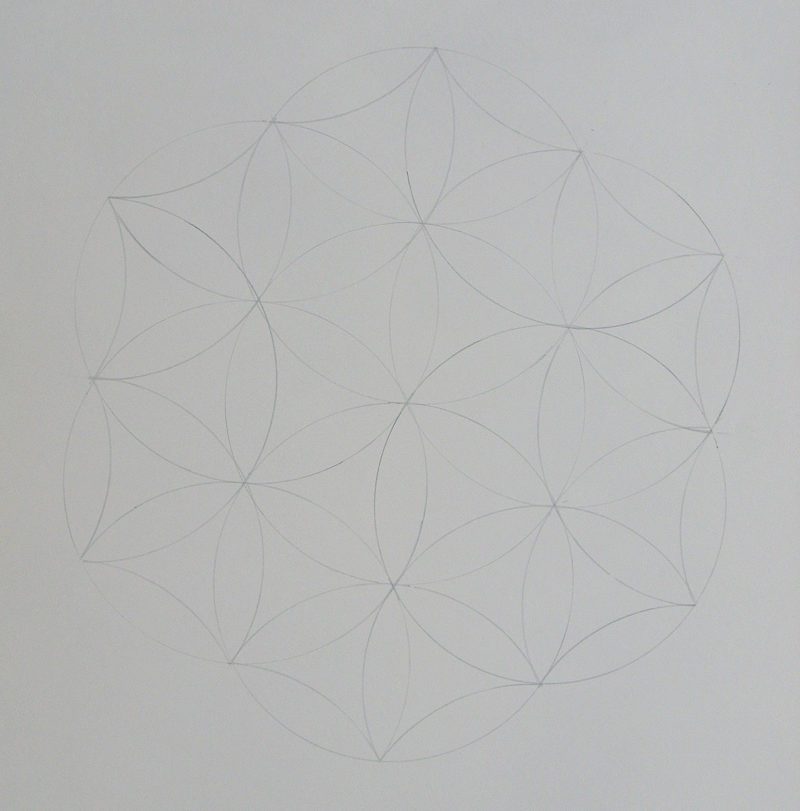 I know that it’s a little hard to see, but it will be beautiful in the charms she sent me. And I think it was destiny because there are 42 petals and 42 fabrics in the charm pack. I’ve already had one setback when working on this quilt…for some reason I tried to use a new product that I didn’t confirm was the right one. So I cut out 42 petals for the stabilizer for the petals and went to iron it on the fabric only to discover that the product I purchased was not in fact fusible. Instead it wrinkled into a tiny mess. So I had to start all over and re-cut all of the petals in freezer paper instead. But I keep looking at that method and it says that it really works better when you double up the freezer paper…so I think that I might be cutting another 42 petals to go on top of those. More work to go on that…

But I’ve really been trying to get some work done on the doll quilt. I have a lot of work yet to go including actually making it into a quilt! LOL. I started by having a go at the rainbow. I’ve been planning this for months so I had a good idea of what I wanted to do. But getting it done was a whole other matter. I really wanted to be able to piece the whole rainbow and applique it to the quilt as one piece. But reality quickly set in and I soon decided to raw edge applique it in pieces. One of the hardest parts was getting the right curve on the rainbow. I played with a string for quite a while trying different placements. But once I figured that out it was “simply” a matter of cutting up dozens of tiny pieces of fabric and heat n bond and laying then out together. 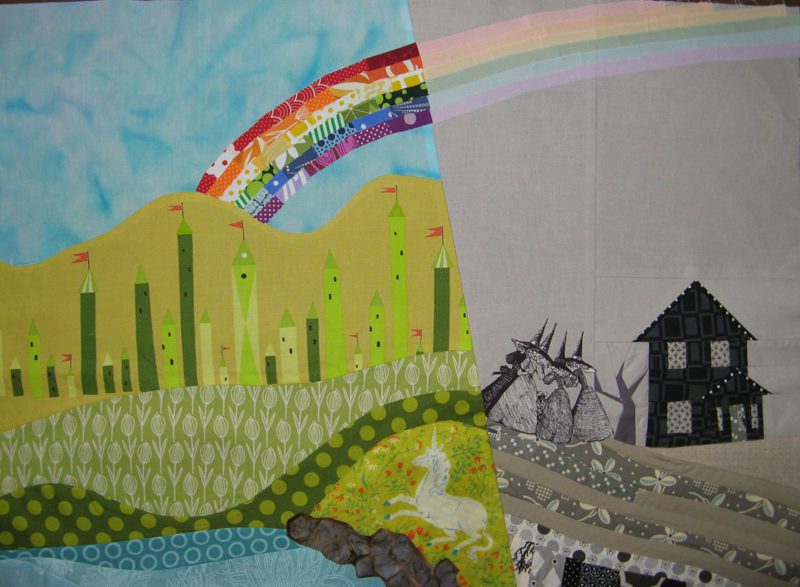 A detail of the fabrics…there are lots of favorites in there, but it’s hard to spot them all cut up so tiny! 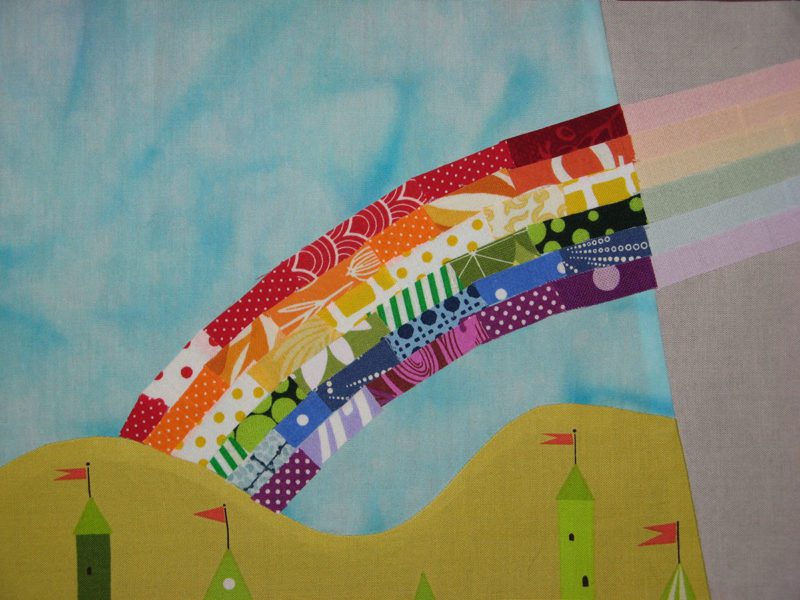 I got a bunch more work done on it today…but I’ll post about that tomorrow! It’s getting late and I must head to bed!

5 thoughts on “Doll Quilt Progress and my many other projects!”