Well I’m officially done on my end for the pillow talk swap. And I must say that it was quite the success on the receiving end for me. I received a gorgeous pillow cover from Tacha a few days ago all the way from Germany, but I don’t have a pillow form for the size she made yet. So I haven’t taken any pictures of it. Agh! But I adore it and love it and will share her creative genius with you all another day…after I get to a store that sells pillow forms in the right size.

I’m particularly happy that I finished my own pillow and managed to make it to the quite busy post office (what’s going on…a holiday or something? LOL). So it is off on its merry way to its new owner. I hope that person loves it the way I do…because I think I started making it a little bit for me. I didn’t mean to, but I realized that it matched a quilt of mine perfectly. Pictures to follow. 😉

So if you like a pleated combination of aqua solids with linen, quilting, some french inspired fabrics, a little joel dewberry and covered buttons….well then, I guess you’ll like this pillow. 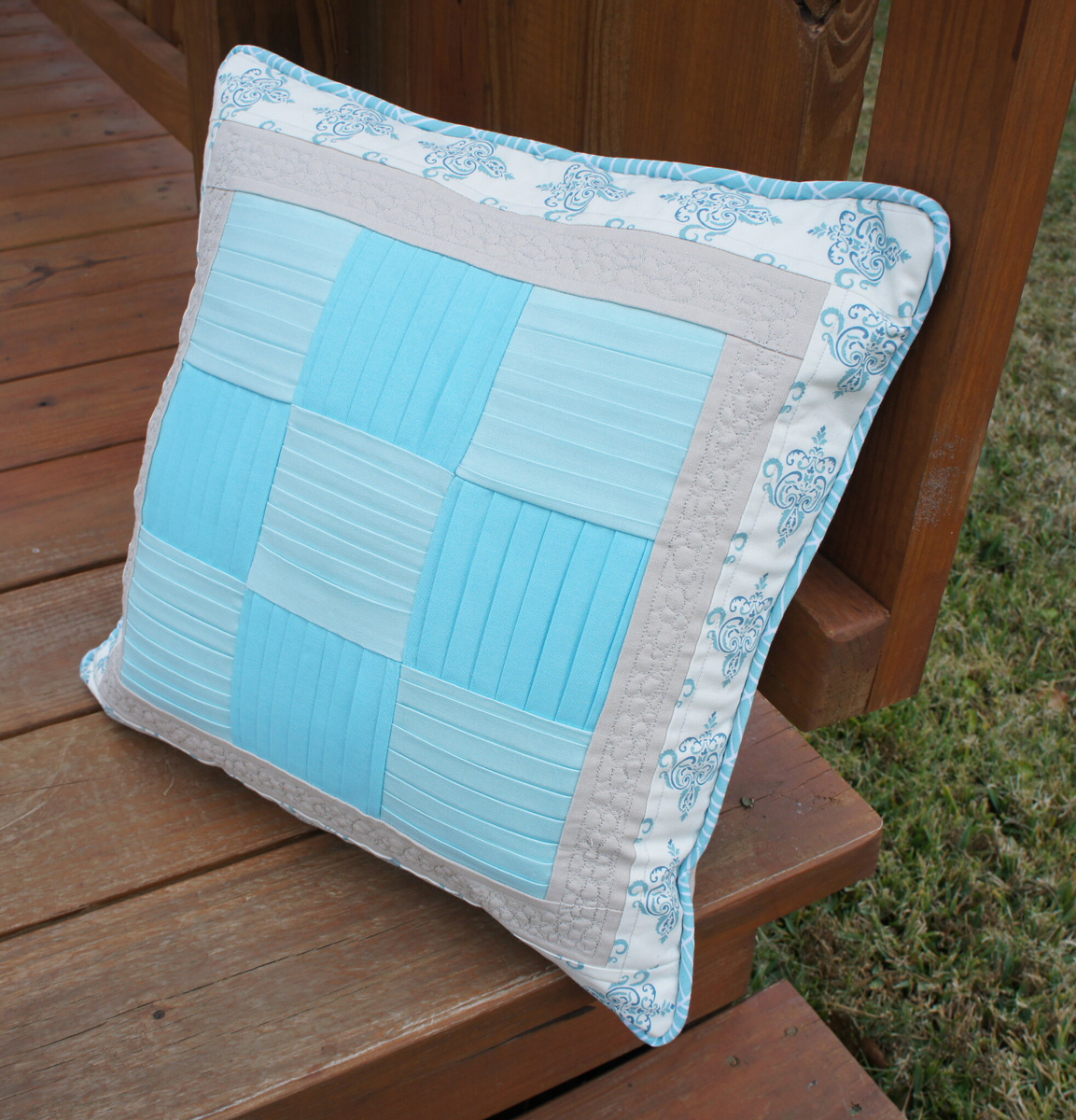 As is par for the course with me, I attempted techniques that I don’t do all the time: piping and buttons. I’ve done them both before a number of times over 20 or so years of sewing (I started young!), but they are not things that I do on a regular basis. I was terrified of the piping…it’s just one of those things that can make me quiver. But I pulled through respectably this time. I did some more research and that helped I think. But also just going slowly and knowing my previous frustrations helped a lot. 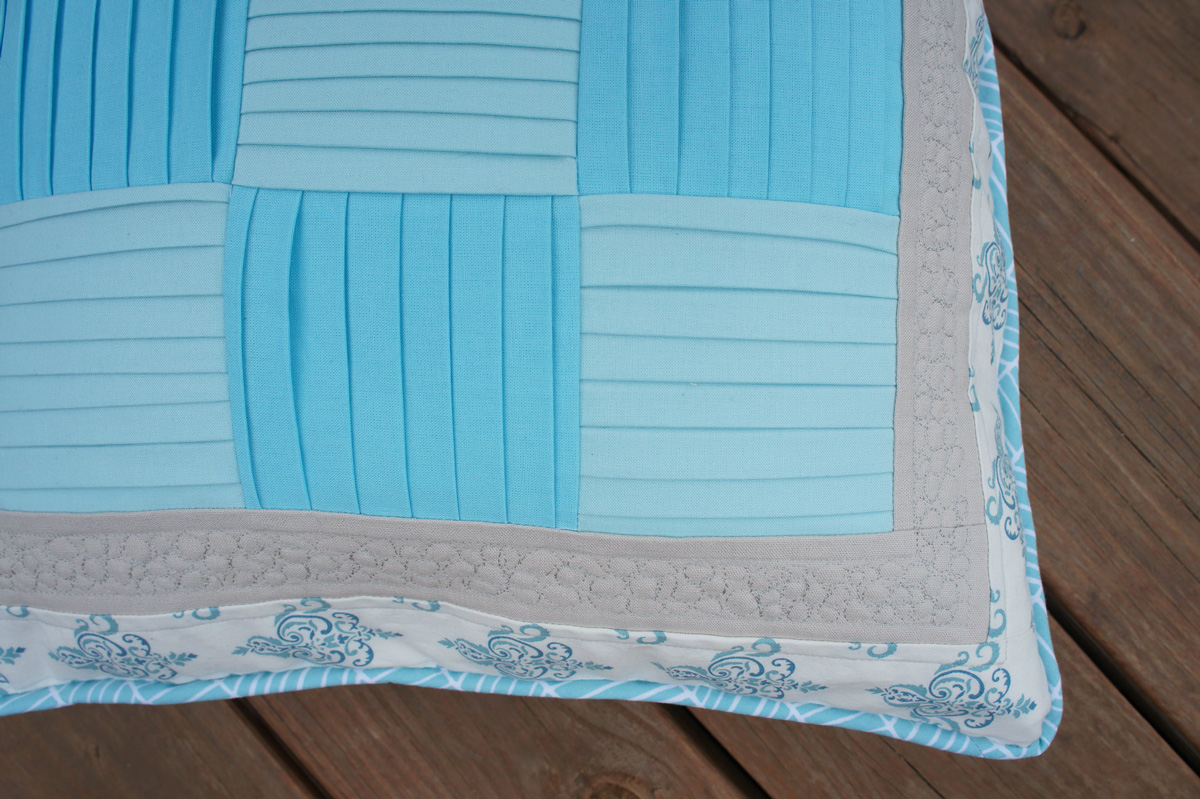 I also did a button flap closure for the back of the pillow. I made the back out of linen and covered the buttons in the same Joel Dewberry Fabric (one of my all time faves!). I love the simplicity and balance that it has. Thankfully before I cut the fabric out I realized that I had already made an error in my calculations. I had allowed for seam allowance around the edge and for the double turned edge on each side…but I didn’t account for the fact that the two pieces need to not just meet but overlap! But God smiled on me and I quickly realized that I had not correctly figured out that dimension. 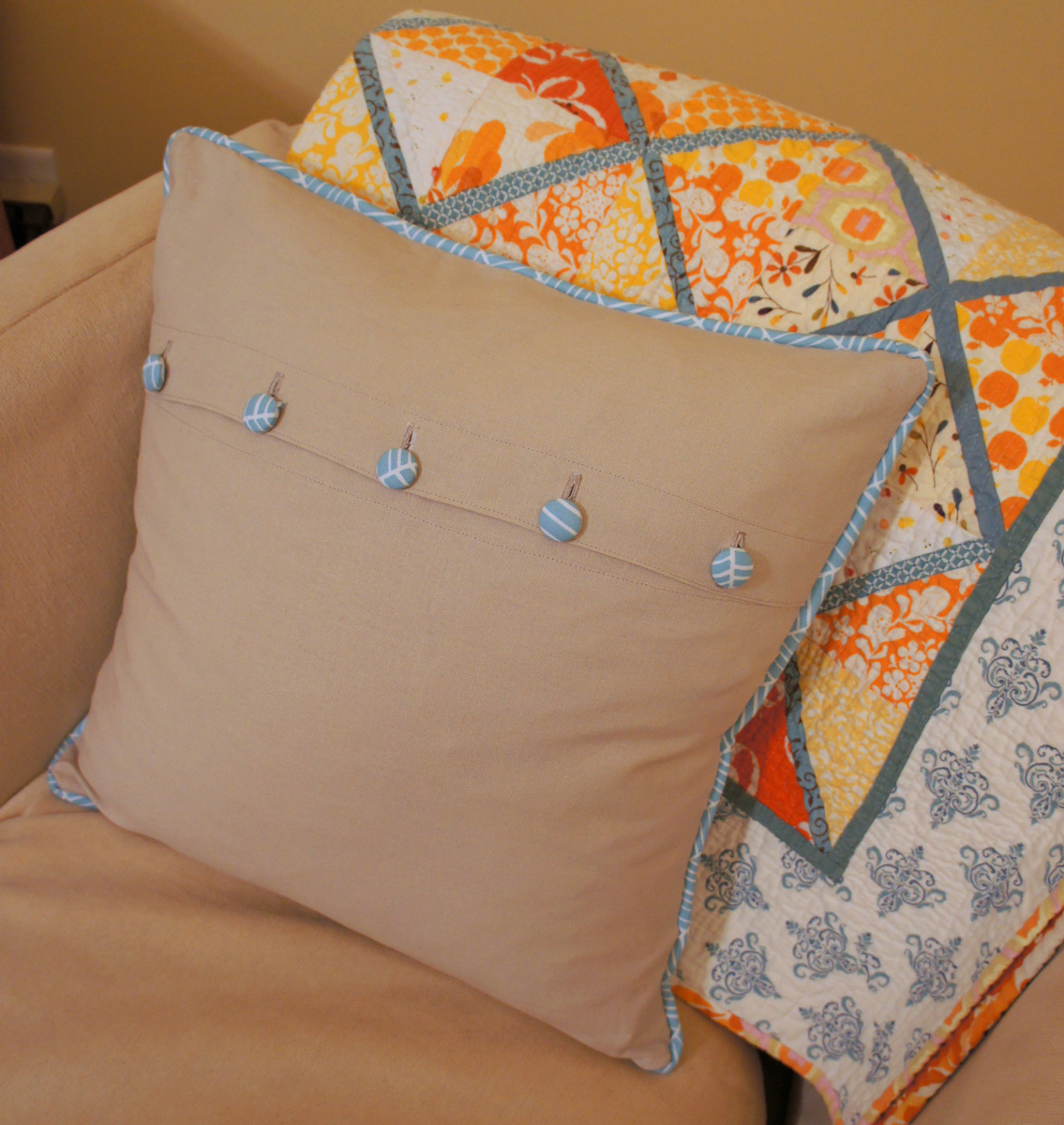 I also have never done pleating before…so there are plenty of errors in that, but I think that the turn of the pattern helps disguise that as well as the change in fabric colors. See…when you plan ahead for the possibility of mistakes, it can really help! 😉 The pleating is all done by hand and eventually just by eyeballing it for the most part. 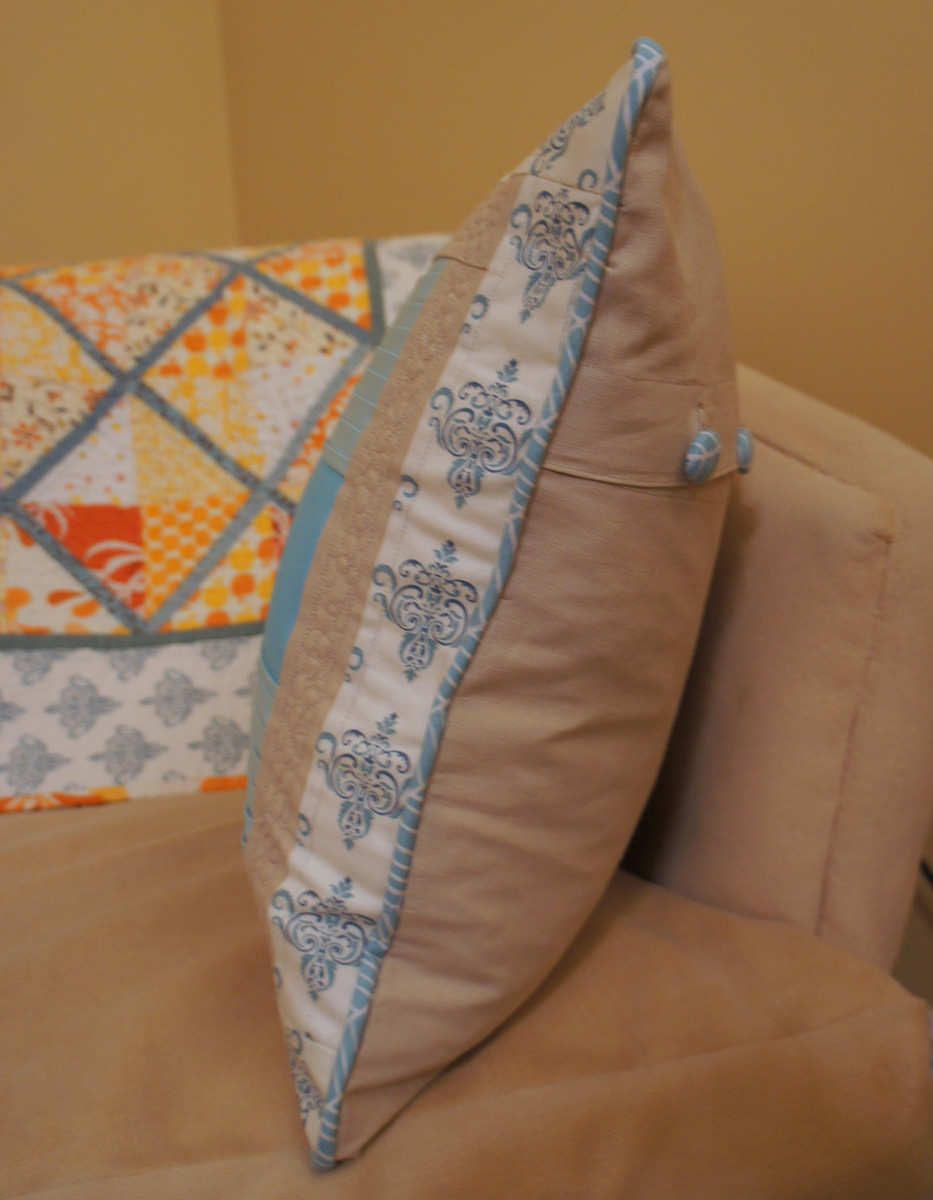 And here it is with a quilt that I made a few years ago. I obviously gravitate towards the same colors. What can I say? Blue makes me happy. You should see my fabric stash…it is definitely heavily weighted in that area. LOL. 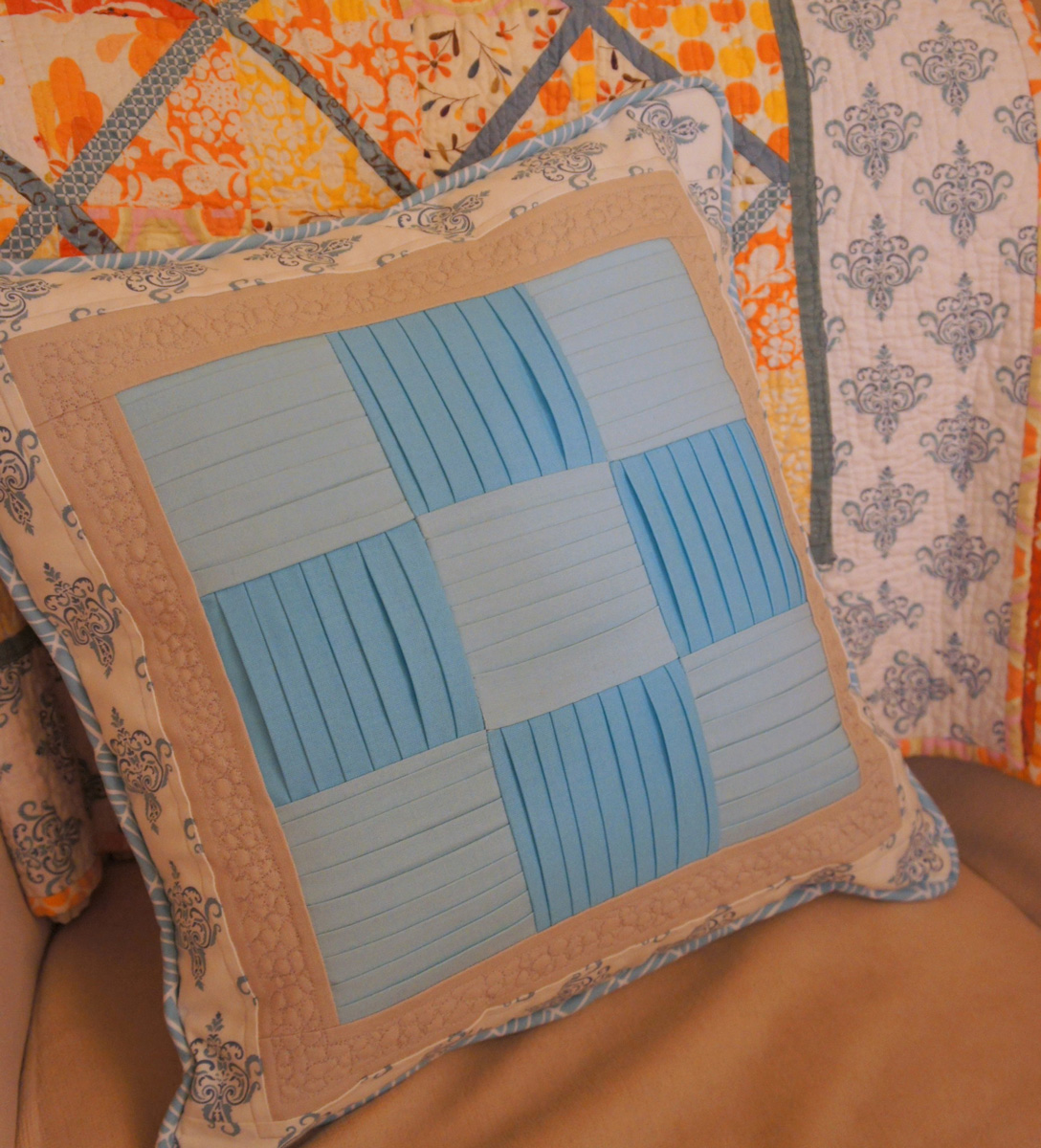 So, now I just need to finish my 3 x 6 Bee blocks (which I believe are officially late, but I think they’ll forgive me for the block). I have all the fabric cut out, one completely done, two close to finished and three totally unsewn. So it will probably take a couple of days to get that all together. Oh yeah…and my sewing room is a complete disaster because we’re in the process of completely reorganizing it. I’m currently sewing on the dining room table because that is where I needed to put the machine while we were working on the room. But I think that the sewing room (or as I read I should call it, quilting studio) will be infinitely more accessible and pleasing. I definitely create better in a peaceful place…but more on that later. For now, I’m just happy to be finished with a pillow!