Well, I’ve recently had a chance to try out the local long arm quilting machine to whip through a few quilt tops before I leave town.  Let’s just say that I have very mixed feelings about the experience.  I have this impression that using a long arm quilter makes everything easier and better.  After all, you can quilt a large queen or king-sized quilt in matter of a few hours.  But reality struck as I attempted to use the long arm quilter on my own.

I quilted one twin-sized quilt the first day of my two days of quilting.  And all went fairly smoothly.  I had the woman who taught the long arm class there to help me set up the machine and do the adjustments as I needed.  I chose to quilt the top that I recently put together after a few years of holding onto the rows.  You might recall it.  It has blue and green and white and lots of circles!

I chose to do a loopy pattern that I felt I could reasonably tackle as my first attempt at free-motion quilting on a long arm machine.  And I’m pretty happy with how this one turned out.  The all-over pattern brings some continuity to the quilt made from different rows.  I’m saving a full reveal of all of the quilts until I get a chance to bind them and show them off separately, but I did remember to take some close-ups of the curved flying geese row at the top that some of you requested.  I have no idea how she made it and no idea how to get in touch with her.  But here’s the pictures nonetheless. 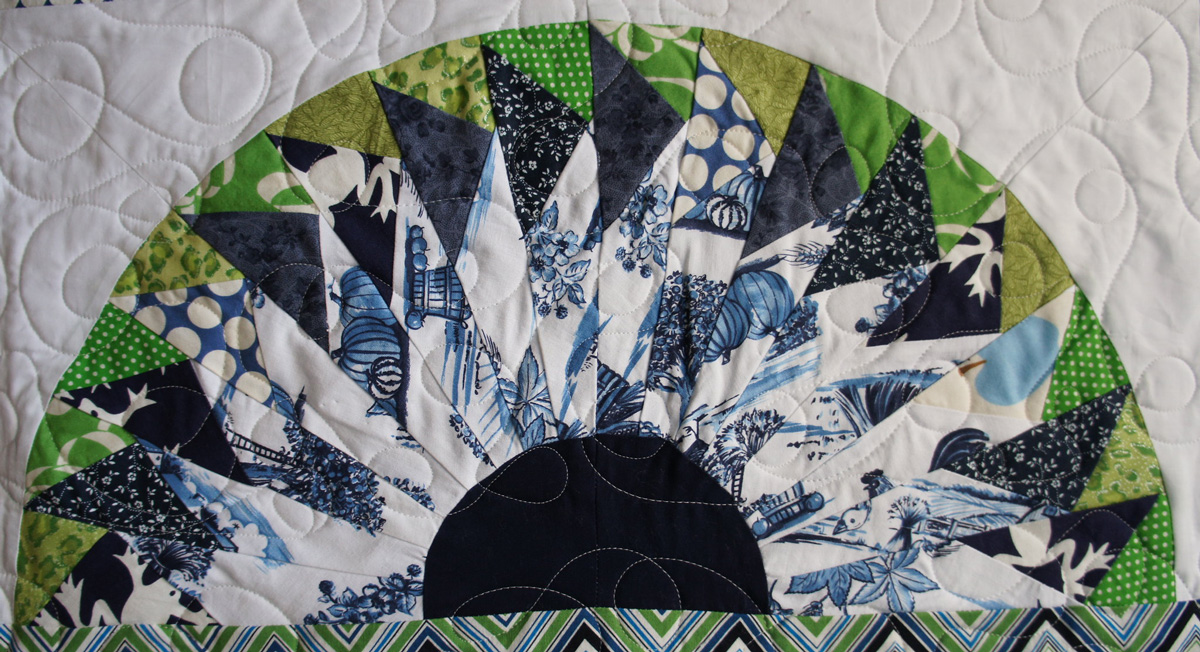 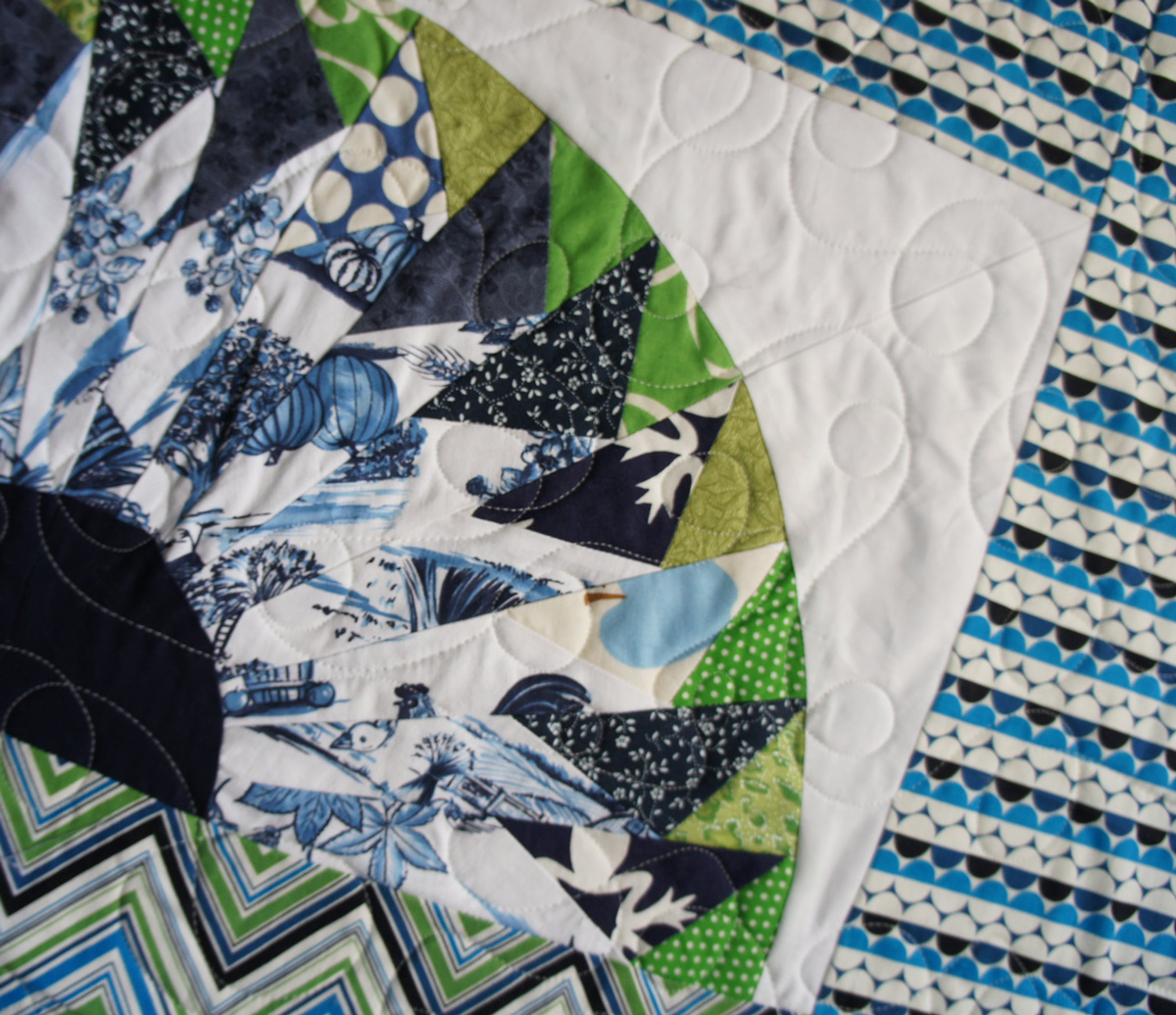 I started out with a crib quilt that I wanted to use as a practice for some quilting ideas.  But crazy quilting techniques went out the window when I realized I was on my own to figure out how to use the huge machine with no instructions.  None.  No diagrams, no nothing.  Frankly, I would never let someone use my machine without any instruction and it’s nowhere near the price of this machine! 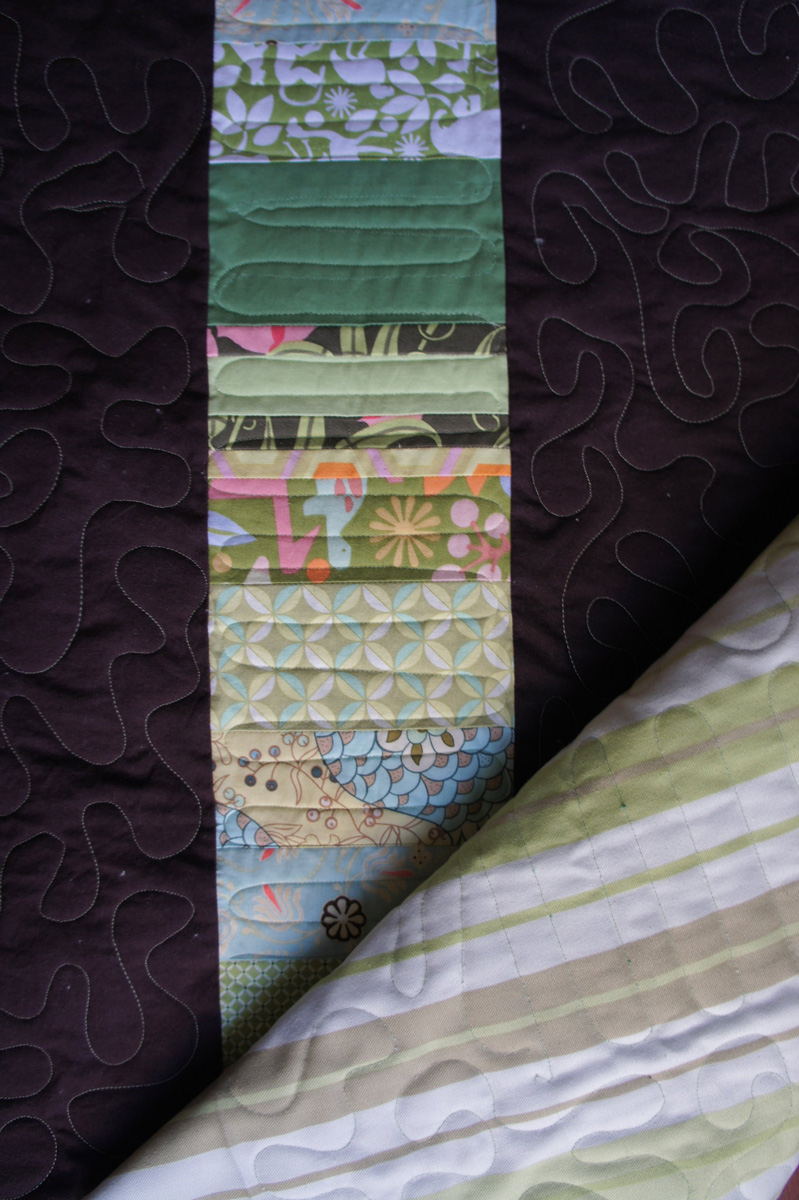 I think just about everything that could go wrong did.  I had the quilt on there the wrong way.  The thread of course broke and the machine needed to be rethreaded…oh and did I mention that the store is under new management (which in the long run will be a good thing) and the woman running the store doesn’t know anything about anything.  She’s sweet but uninformed.  So I muddled my way through that little quilt…taking hours on what should have been a 45 minute quick top.

I moved on to my pink quilt, properly named Neapolitan Dreams, and at least I managed to get the quilt rolled on the machine correctly.  I was now an expert in threading the machine due to the number of times I had to rethread it on the first quilt.  I do think that the machine was out to get me, but after hours and hours with the machine, I have a feeling that I understand it better than the lady who was supposed to be helping me.  Too bad I’ll never use it again. 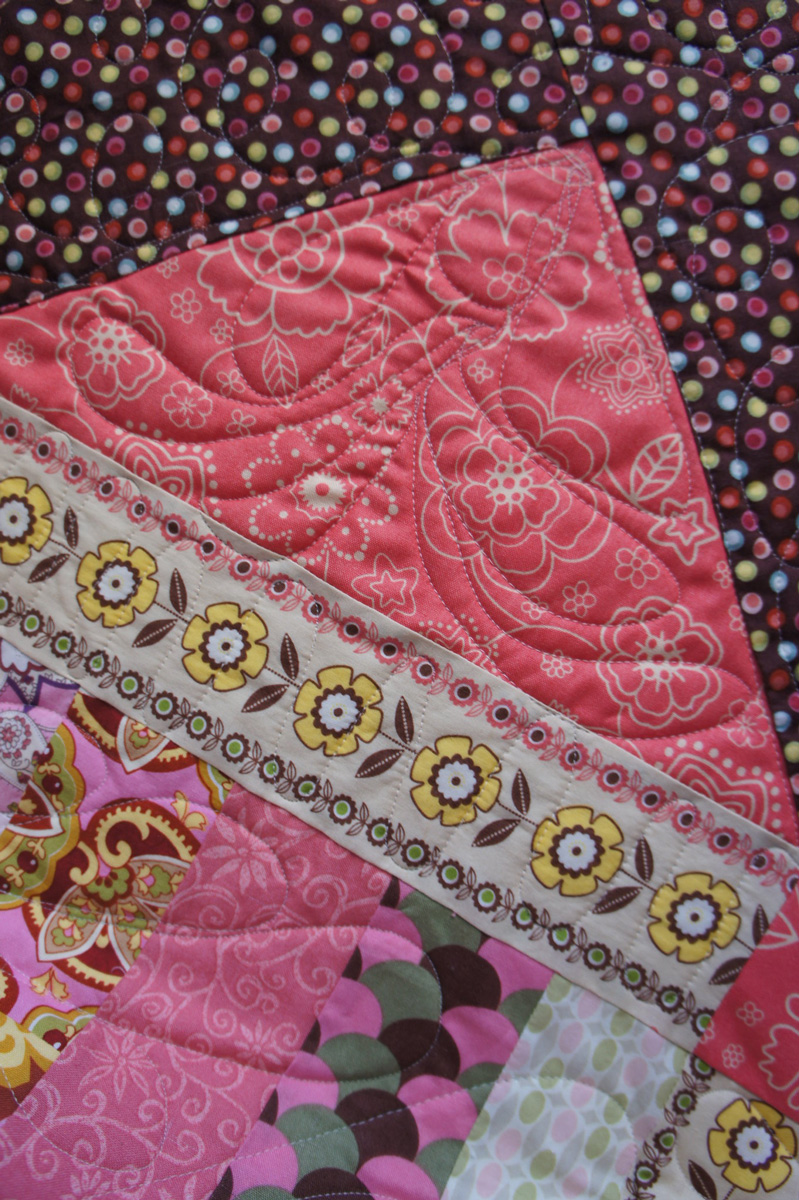 Again, I did some random free motion quilting…at a very lame attempt at feathering.  I know that it looks ok…and I haven’t been able to wash the quilt yet because it is not bound.  But I know that it could have been so much more than it is.

And that quilt top that I worked so hard to finish for Monday for the long arm quilting machine?  Well, the baby quilt and the pink quilt took the whole day and there was no way that I was going to risk that new quilt top with my shady quilting abilities.

So, lesson learned.  A long arm machine is not a magic machine…especially if you are free motion quilting and are not a natural artist.  I know other people have no problems, but I really think I could do better if I were able to follow a pattern for a bit to get a feel for the motion that you need to use for particular patterns.  And I really would love to learn more about the machines from someone who knows what they are doing. 😉  But in the end, I have three more quilts finished and ready to bound once I get to South Bend.  Can you believe that I actually had aspirations of getting even the zig-zag quilt done?!  Reality check needed.