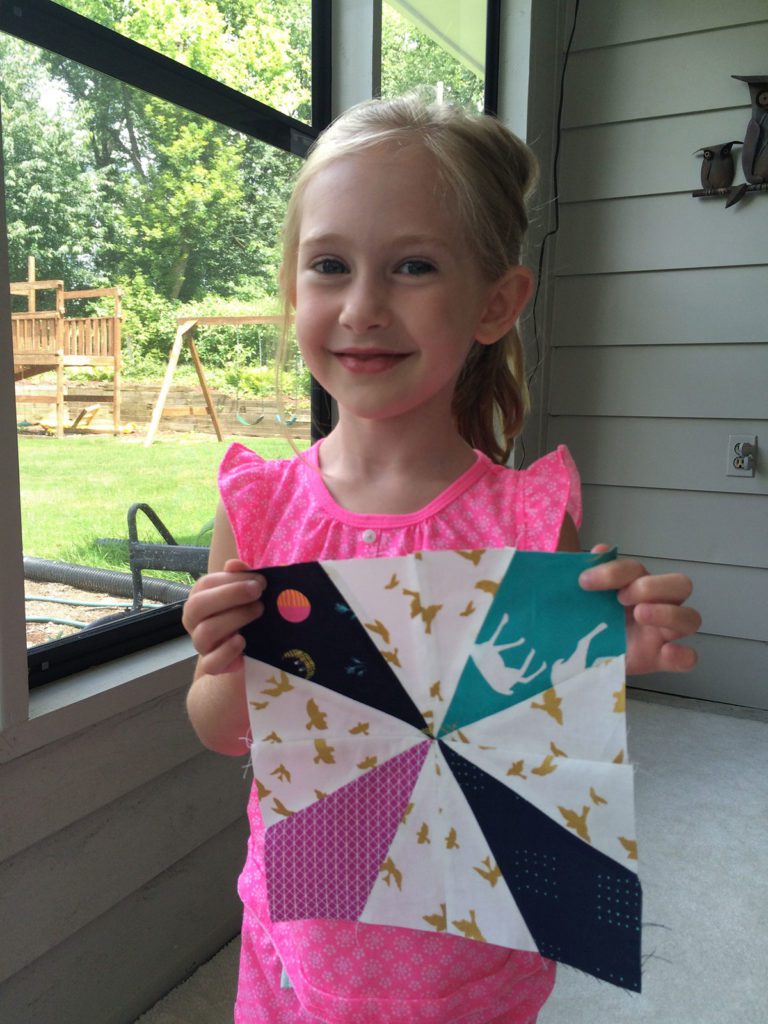 So a group of friends and I have gotten together from across the country and started a sewing bee for our children.  This is month two and the kids are still in the “it’s really exciting” phase 😉  Hopefully they can keep that up.  We all know how attention spans can become limited.  But I love this idea for both introducing my daughter to the idea that quilting is something you do WITH people and for the opportunity to show her different techniques and fabrics one block at a time.

This month is Faith’s (freshlemonquilts) daughter’s month.  And Faith and her daughter Avery set the bar a bit higher with a Pinterest board (which I’m totally doing with my daughter right after this post because her month is next).  Avery chose a theme of navy, dark pink, aqua, gold and white colors and any size star block.

So I let Caitlyn dive into my scraps with perhaps a bit of guidance toward what I thought would be good starter fabrics and then she chose the fabrics from the variety that she pulled out. Sound familiar?  I do that exact thing!

My daughter is 5 1/2, so there are definitely some steps that she needs some guidance with such as cutting and ironing and reaching the pedal to sew.  But we are learning something new every time.
This month, with a star block, I decided to introduce her to the fun world of Accuquilt die cutters. She’s been eyeing those machines her whole life I think and I  had a new die from them, the kite die which I thought could be interpreted as a star.

The beauty of using the die cutter is that Caitlyn was able to “cut” all of the fabrics herself…and she got some pretty specific shapes. Plus it made it easier to make sure that all of her edges were line up since the cutter is designed to help you do all of that. 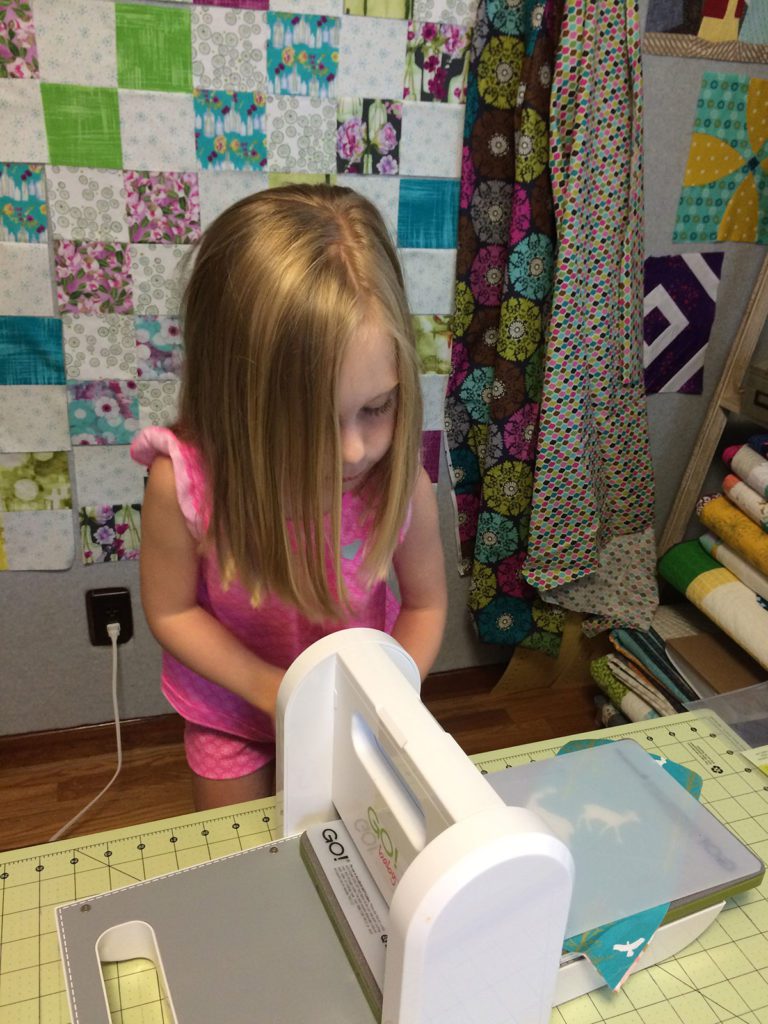 Here’s a picture of her using it for the first time!!  Isn’t she adorable?!

I had her put the blocks on the design wall to lay out her pattern and understand how all of those pieces fit together.  We auditioned all of the fabrics and we decided that her initial pink fabric was not quite what we wanted so she went back to the stash pile and chose another fabric that worked much better…so we got to talk about contrast and such.  Good lessons! 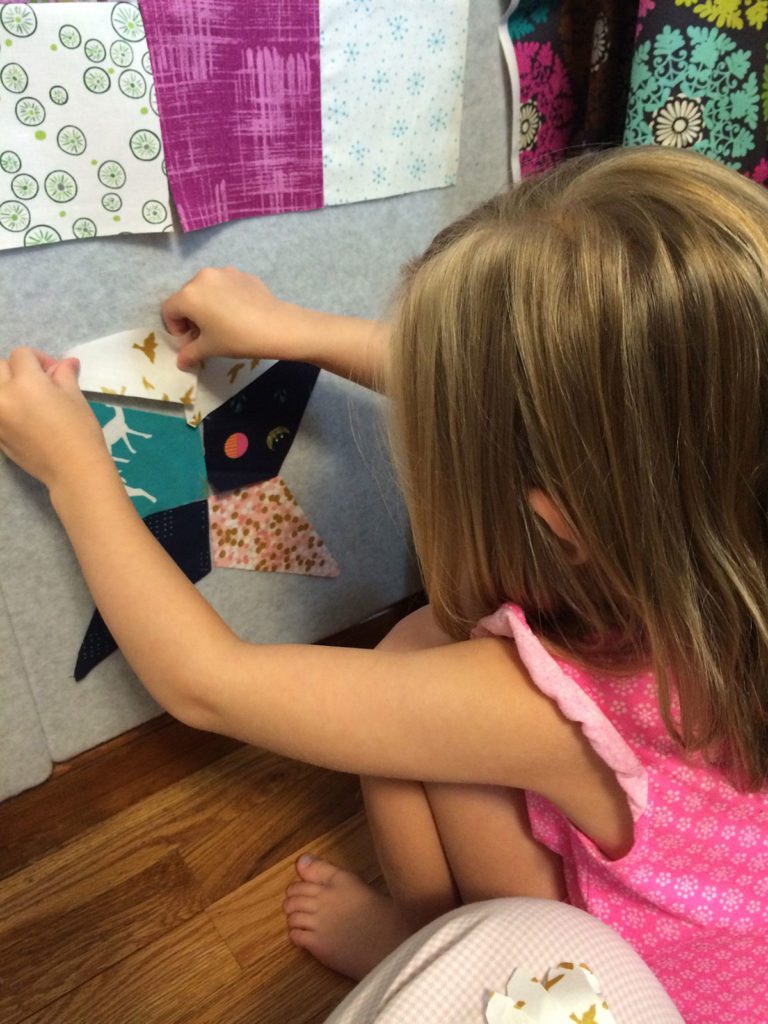 I’ll admit that she was a bit squirrely this time while sewing…let’s chalk it up to summer. But we only had one block to make and it really didn’t have too many seams in the end. 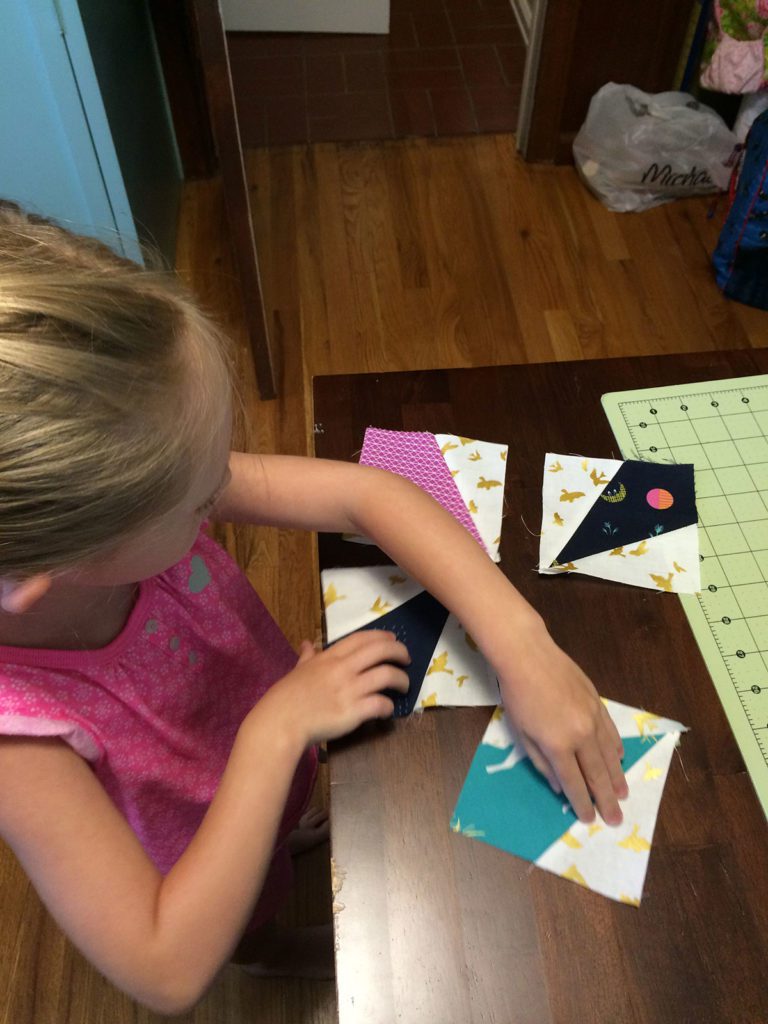 My silly girl was excited to take her first picture of her own quilt block (I don’t know why I didn’t think of that last time).  And I was cracking up because she immediately put her feet in the picture…creating that classic photo that so many have horrors of – the foot picture! lol  Oh well.  Little kid feet are allowed I think. 😉 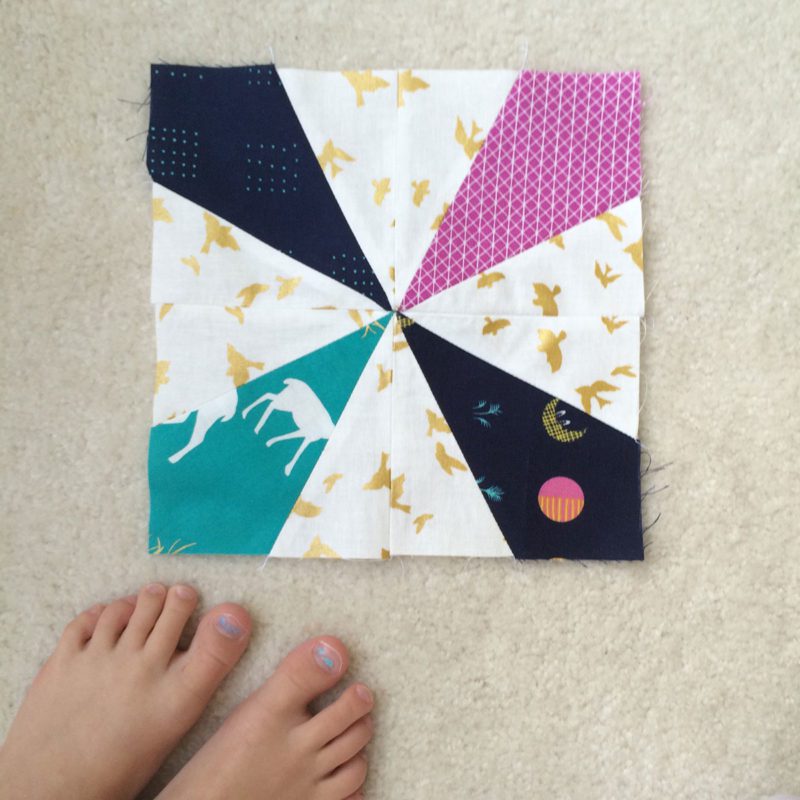 Then she gave me a variety of posed pictures based on emotions (this girl has a future in entertainment somewhere) and we ended up with fun group of photos. 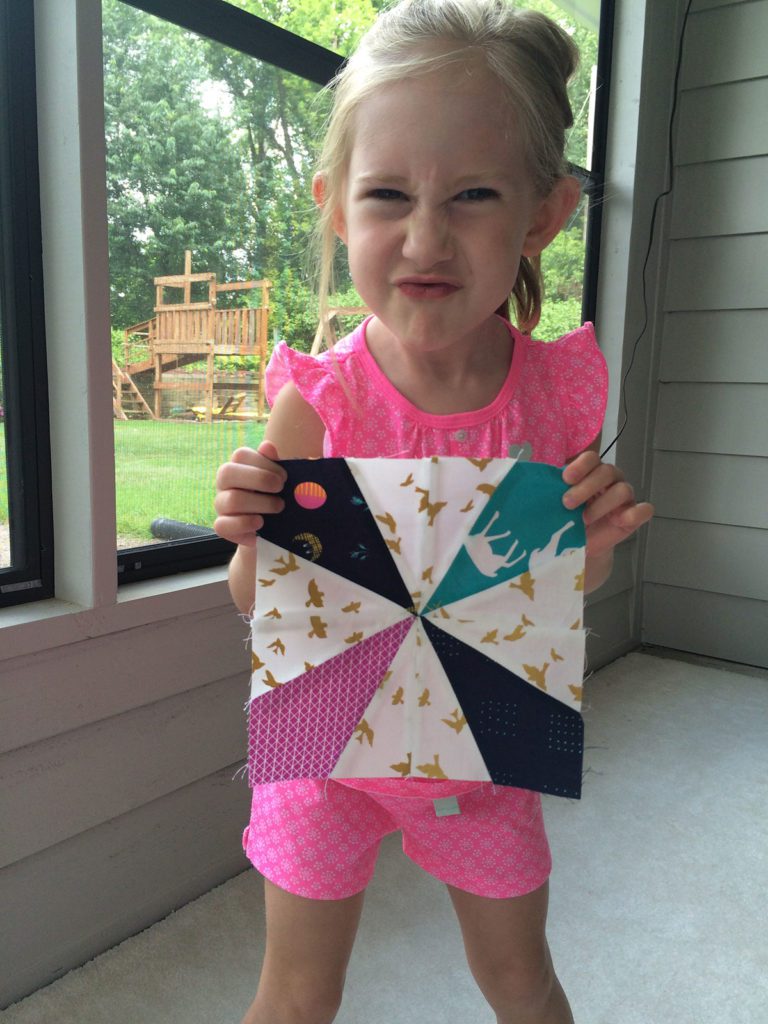 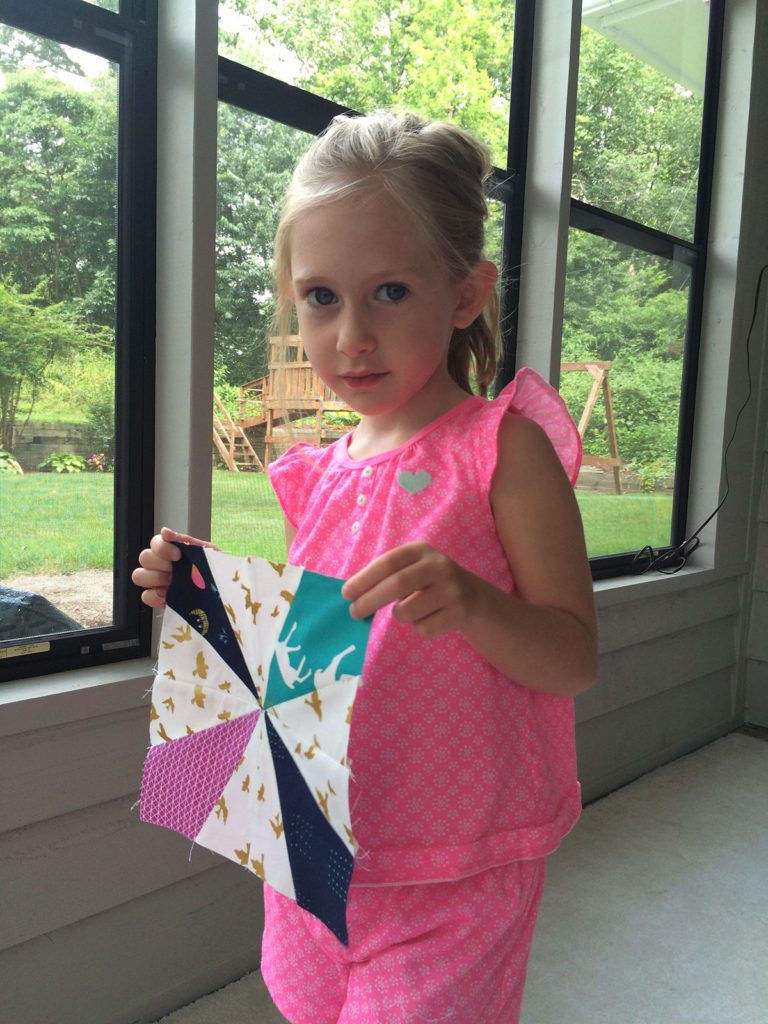 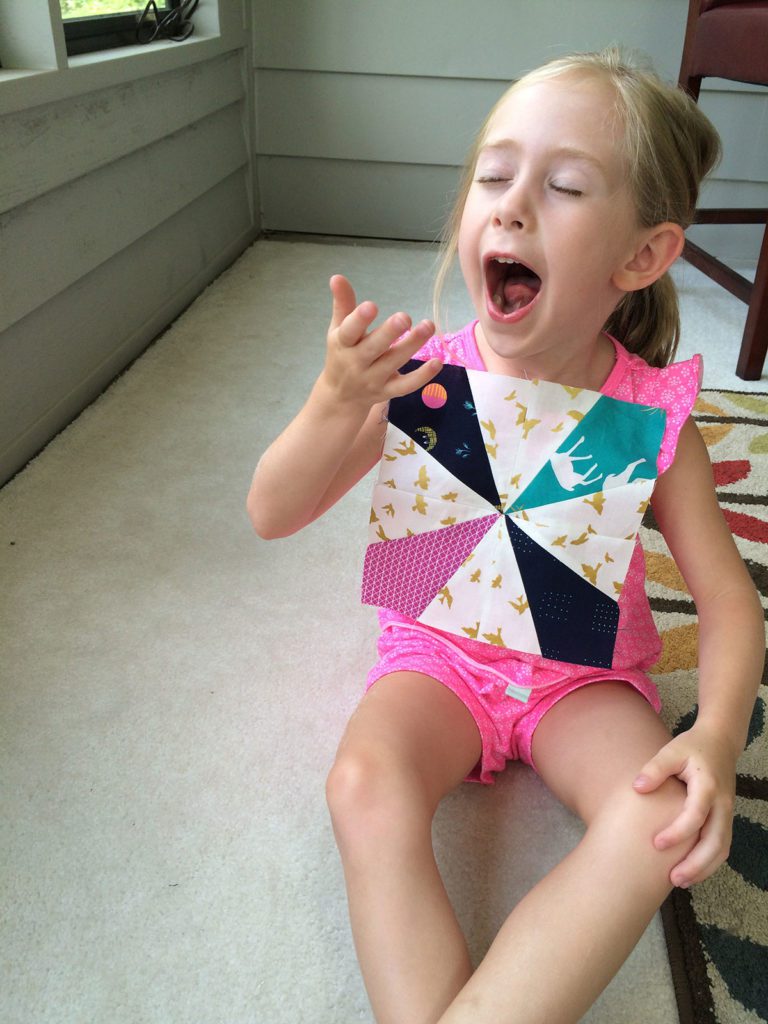 Now we just need to decide WHAT she is going to want for her month.  She tells me she knows…. but I don’t know WHAT that means. lol